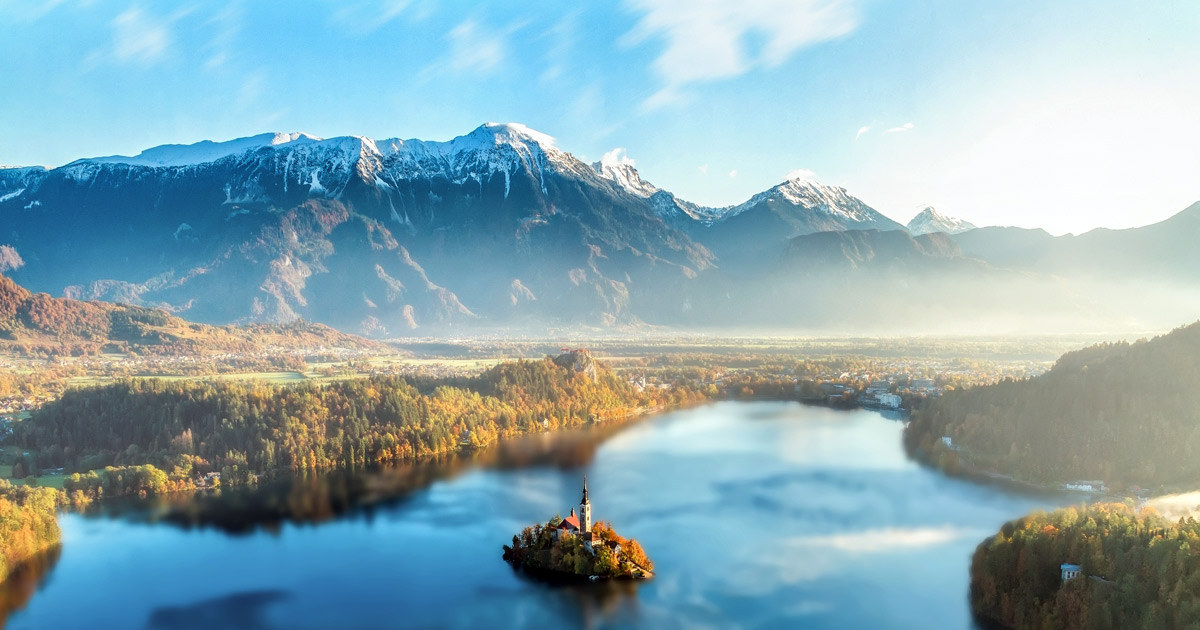 Bled, Slovenia, is a place of immense natural beauty and cultural heritage. Near a lake of the same name, and together with the surrounding areas, Bled ranks among the most beautiful of alpine resorts. In the beginning of the 2010, a woman from Bled gave birth at home with the help of an Austrian midwife and Slovenian doula. Due to postpartum bleeding, she and her newborn baby were transferred to a local hospital, accompanied by their midwife. Using her skills, the midwife was able to stop the bleeding before the woman entered the maternity hospital, and mother and baby soon returned home healthy. The incident received major media coverage, often with violent tones, followed by criminalization of the case.

At that time, Slovenia’s ministry of health announced some legislative changes that would regulate the possibility of giving birth outside hospitals. Legislative amendments now being drafted will likely introduce changes, though regulations regarding out-of-hospital birth remain unchanged. There is a big public discussion about governmental attempts to centralize maternity units on the grounds that maternity hospitals with less than 1000 births per year are unsafe. Closing smaller maternity units will limit access to medical backup for those who wish to establish freestanding birth centers or organize homebirths in less populated areas.

An Overview of Slovenian Maternity Care

According to some indicators, Slovenia, a country with two million people and 21,856 babies born in the year 2009, is among those with good perinatal results; perinatal mortality in 2009 was 6.8/1000 births (for babies with birth weight over 1000 g it was 3.7/1000 births) (Perinatal Information System 2004). Maternal mortality in Slovenia from 1998–2001 was 12.5/100,000 live babies, 15.1/100,000 live babies from 2000–2002 and 9.4/100,000 live babies from 2003–2005 (Ponikvar et al. 2010). That means zero to four dead women per year. In Slovenia, doctors do not directly report maternal deaths to a special database, but we do use multiple methods to identify them and to avoid case misclassification and underestimation of maternal mortality. Identification of pregnancy-associated deaths is based on the manual revision of death certificates and the computer based linkage of available databases. A multidisciplinary “working group for maternal mortality investigation” analyzes all identified pregnancy-associated deaths (Personal Correspondence with Working Group member). The average age of a mother at birth in Slovenia is 30.1 years, at first birth 28.4 years. Teenage pregnancy is not a problem (Perinatal Information System).

Women in Slovenia mostly give birth in one of 14 maternity hospitals; there are no freestanding birth centers. In the health care system there is no official professional help available and/or protocols for homebirths and Slovenia has no autonomous midwifery practice. This phenomenological overview of present day motherhood in its beginnings, and an analysis of how motherhood is viewed and experienced by women who pass through medical institutions, is based on an extensive national survey. The survey, entitled, “Maternity Hospitals for Today,” was carried out in 2005 and asked women about their experiences during pregnancy, childbirth and the postnatal period.

The data from survey questionnaires talks for itself: 72% of respondents received an enema, 87% were shaved and 67% had a routine, non-stop CTG (cardiotocography) performed. (Routine vaginal exams are also an unwritten protocol.) Eighty percent of women were lying on their backs during birth and delivery. Drinking was not allowed during almost 60% of respondents’ labours and eating during birth was forbidden. Routine IV was used in 70%; induction with different drugs was performed in 30%; an augmentation with oxytocin was used in 43%. Of all vaginal births reported in the questionnaires, epidural was used in 6.6%, vacuum in 4%, forceps in 0.4%, episiotomy in 54% and fundal pressure in 60%. The cesarean rate was 13.7%.

Eighty-six percent of maternity hospitals in Slovenia are Baby Friendly Hospitals (Wagner 2007). Official data from Perinatal Information System for 2009 show a decline in the episiotomy rate, which is around 32%. The current c-section rate is 17.3%, with differences among maternity units from 10.6% to 22 %, and 3.1% of babies were born with a vacuum. The rate of spontaneous childbirth stayed the same as previous years—one third of vaginal births happen without induction or augmentation. Though no accurate data is available, the rate of epidural use during labour is rapidly growing. In some maternity units, epidurals are free; in other units women have to pay for it, and in some places, due to a lack of anesthesiologists, epidurals are not always available.

If a woman has health insurance (and very few in Slovenia don’t have it), maternity care is free and is divided among different health practitioners. Gynaecologists take care of normal and high-risk women. In theory, a midwife can do five appointments, but this is never the case. Women don’t know their midwife before entering the maternity hospital and one midwife is routinely responsible for two, three or more women during birth. Doctors still (informally) control midwives. In almost all maternity hospitals, only one companion is allowed to be present with a mother during labour and having older children attend a birth is considered an unacceptable practice by Slovenian health care practitioners. Doulas are having problems entering birth rooms, especially when a father-to-be would like to be there, too. After a mother returns home with her new baby, a community nurse takes over the care of mother and baby.

Established birth practices have not been satisfactorily updated in line with the most recent scientific findings. Some frequently used practices are not of benefit during low-risk labour and birth, and some even harm women and/or babies. On the other hand, there are practices with scientifically proven benefits that have not been established in Slovenia. Knowledge about “normality,” and the physiology of pregnancy, childbirth and the postpartum period is not very common and introduction of good practices into labour wards is slow.

Expectant women and families face additional problems. Women and their partners are not always properly informed about the advantages and disadvantages of individual interventions and/or treatments, care and procedures during pregnancy, labour, birth and the postpartum period, or about other alternatives and choices. The attitude of medical experts towards a woman during pregnancy, childbirth and afterwards, as well as towards her child and family, does not always meet quality standards. Many women and parents are not sufficiently informed about patient rights, and patient rights are not always consistently ensured.

Evidence shows that some mothers and babies suffer from harmful birth experiences. As a therapist for mental health problems in the childbearing period, I am in day-to-day contact with mothers who connect birth and maternity with suffering. I keep extensive documentation about women suffering from birth trauma, postpartum depression and Postnatal Posttraumatic Stress Disorder (PN PTSD). Birth trauma is not well known among the public, or even among health care professionals. Generally, women who have been suffering and try to talk about their experience often received responses like: “Never mind about your experience. Your baby is healthy; she/he is beautiful, isn’t this the most important thing?”

After going through routine birth procedures considered “normal” by our maternity care standards, a woman said to me, “I felt like an object, not a human being at all.” Due to a failure to obtain proper consent when the health care professional failed to include her in the decision-making process, she felt that she was as powerless as a victim of rape. There was a time in my research when a woman describing her delivery stopped for a moment and said with a wounded expression, “I feel like I have been raped!” And another one shared, “It’s like somebody has stolen my confidence; I don’t trust myself or my body anymore. I’m a total failure as a mother, as a woman, not capable of delivering my child, not capable to breastfeed or even take care of him” (Drglin 2007).

The medical paradigm is dominant among doctors and midwives in Slovenia and childbirth is medicalized. We have one midwifery department at Health Faculty in Ljubljana, where a midwifery paradigm is slowly developing; the most acute problem is a lack of opportunity for students to practice a humanistic and holistic paradigm. The only non-governmental organisation in Slovenia dedicated to improvement in maternity care on a national level is called the Natural Beginnings Society, officially established in 2000. We are small group of women with growing recognition and support. We work with individuals, couples and groups in pregnancy and postpartum; we educate by organising childbirth and parenthood preparation classes, provide information about maternal (and family) mental health and by offering supportive care and healing, where needed, especially for depression, abuse and birth trauma.

We also help to spread awareness about violations of rights in the health system. We are working at a national level to collect scientific data about pregnancy and birth practices in Slovenia and abroad. We write for a number of scientific and popular publications and collabourate with journalists and progressive health practitioners. In January 2010, the Slovenian translation of the International MotherBaby Childbirth Initiative (IMBCI) was published on the Web site of the International MotherBaby Childbirth Organization (IMBCO). In the same year, we popularised the movie Orgasmic Birth by organizing events with local people around the country. We also organised workshops to educate birth doulas. Starting in 2009, our doula group began having regular meetings and every year we’ve have a special foreign guest: Ina May Gaskin, Marsden Wagner, Debra Pascali-Bonaro, Robbie Davis-Floyd. We also translated two guidebooks into the Slovene language: Ina May’s Guide to Childbirth (the first midwifery-based handbook for mothers-to-be to appear in Slovenian) and Wagner’s Creating Your Birth Plan. In August 2010, the Natural Beginnings Society drew up a proposal for excellent maternity care in Slovenia, named “Our common goal: Excellent maternity care.”

The medicalization of maternity care is not perceived as problematic for all those who receive care and questioning routine practices invokes anxiety. Yet, the medical establishment is slowly recognising the worth of civil initiatives by entering a space of respectful discussion. More women and parents-to-be are raising their voices to change the predominant model of contemporary “childbirth design” in Slovenia. We are still a long way from autonomous midwifery, and the survey result shows that the average user of the health system cannot really imagine autonomous midwifery care.

We look forward to the time when midwives participate in the creation of a childbirth paradigm in Slovenia that suits the needs of each individual woman and is woman (baby and family) centred, when the dualities of woman/foetus and biology/sociology are rejected, as are the divisions between the physical and social experiences of motherhood. We are witnessing the difficult birth of a midwife paradigm and we are working with persistence and with love to raise awareness of the worth of midwives and of the holistic birth paradigm that are only just emerging in the Slovenian world of childbirth.

Zalka Drglin, PhD, is a researcher, consultant for perinatal mental health problems, leader of the programs in the Natural Beginnings Society and country representative for IMBCO.

View all posts by Zalka Drglin