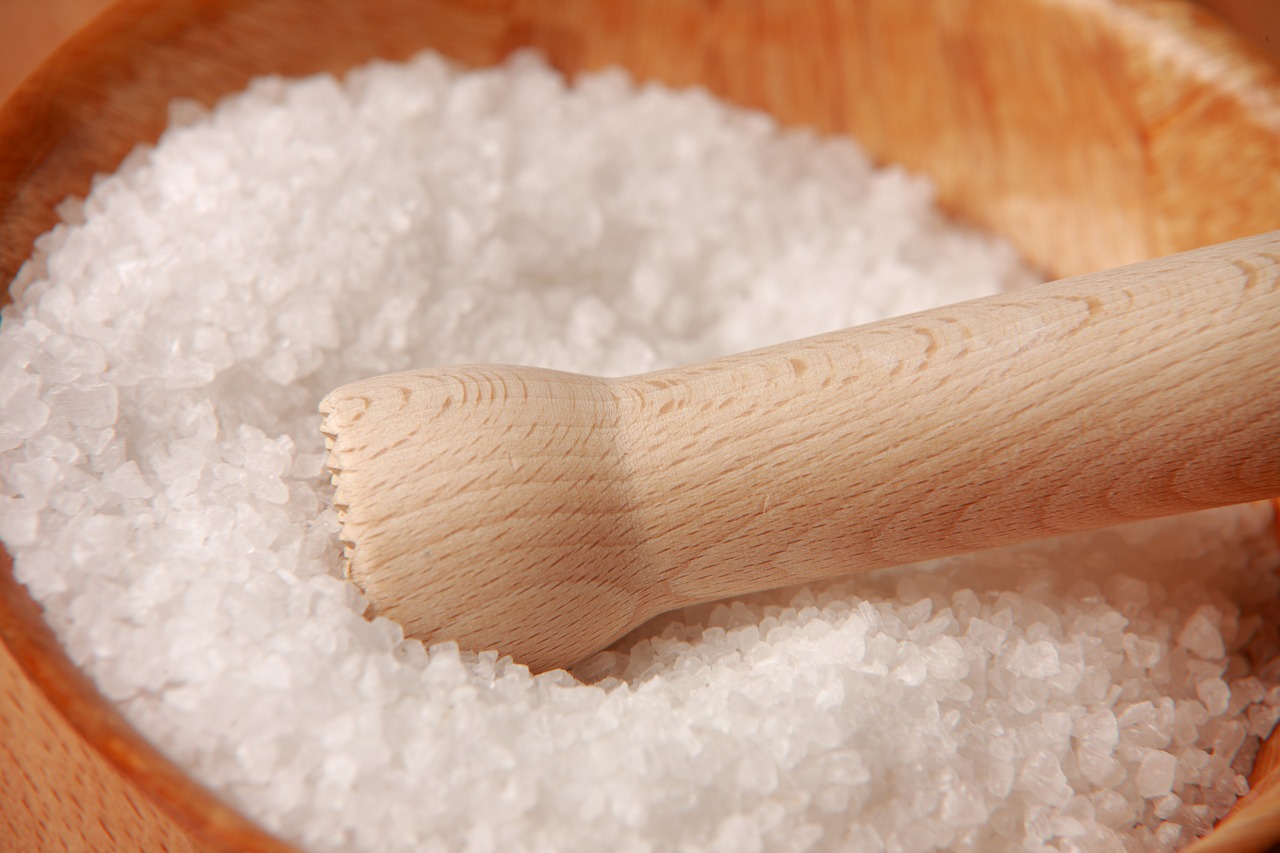 Salt, sodium chloride or common rock salt is dissolved in the same proportion to water in the Earth’s oceans as it is in our blood, amniotic fluid and tears. Salt plays a vital part in every cell of the human body, and the ideal amount of salt for human babies is perfectly found in human breast milk. It grows as a crystal. It preserves food.

Historically, soldiers have been paid in salt. It has also been considered a holy offering. Salt has served a monetary, political, religious or symbolic role for many of the Earth’s cultures. Let’s not underestimate the power of salt to create major change. The British Empire controlled colonial India, forcing the Indians to buy expensive British goods, including salt, even though oceans surrounded the country. Mohandas Gandhi lead the nonviolent resistance that brought down British colonial rule and helped bring about Indian independence in part by defying this constraint and asserting every Indian’s right to walk to the ocean and make her or his own salt.

Although a common substance, it is not surprising that salt is a polycrest—a valuable often-used homeopathic remedy that can heal serious maladies of pregnancy, birth and the postpartum period.

Classical homeopathy embraces the whole person. To prescribe, we must look beyond a set of symptoms to see a client’s entire constitution in order to find the appropriate remedy. For example, a person whose constitutional remedy is Natrum muriaticum is likely to keep her relationships at a polite distance for self-protection. Events of the past, old hurts, disappointments, betrayals and grief are preserved in her memory and are very present in her life. Her melancholy nature and fear of being hurt again guide her actions and relationships.

A client who resonates with the remedy Natrum muriaticum may be polite, respectful and responsible and seem to have her life under control. In prenatals, she says everything is fine and follows suggestions recommended for her minor complaints. Perhaps she does not share her feelings, or if she does, she discusses them in an analytical fashion rather than by crying or displaying emotion. When circumstances or health issues require you to probe more deeply, you may find that this woman rarely cries and when she does, she prefers to cry alone. When sad or hurt, she does not want consolation, as it looks to her like pity for her embarrassingly out-of-control situation. She hides that she is sensitive, is easily hurt and dwells on past disagreeable occurrences. When she is hurt, she prefers to be alone, perhaps going for a long walk. She craves salt. She is either drawn to the ocean or it aggravates her condition. A midwife might notice that she has difficulty urinating in front of others. And often, in her past is a deeply buried, silent grief.

Because of the salt balancing nature of Natrum muriaticum, this homeopathic remedy has successfully dealt with albuminuria and metabolic toxemia of late pregnancy, in combination with dietary recommendations. It has been the remedy for the queasiness of morning sickness and the uncontrollable vomiting of hyperemesis gravidarum. It can also help a baby settle into optimal birthing position.

A first-time mother was having early labor contractions that were keeping her awake for several nights. Destined to be a single mom—the father of the baby was married to another woman—her arrangement with the father was that he would be involved as a support person during her pregnancy and birth. After, they would go their separate ways, a plan that she cheerfully maintained was just what she wanted. Time went on and nothing seemed to help her be in or out of labor. The only food she could eat without throwing up was salty miso soup. Her blood pressure was rising with her exhaustion and she had significant protein in her urine on one occasion. Obviously, something had to change.

In her fatigue and desperation, she finally began to open up and confessed that she was deeply sad and hurt about her relationship with the father of the baby. She secretly loved him and wanted him to marry her and be a family with her and this child, but she went along with the “friendly” relationship so as not to scare him further away from her life. Emotionally, she had no reason to give birth, as that would be the end of their relationship.

We had noticed during this three-day, early labor marathon that she could not pee in front of anyone. So she took Natrum muriaticum LM I. Wow, what a change! She cried. She screamed at the father of the baby. She threw him off her birth team. And then she ate dinner and fell into a sound sleep. Needless to say, everyone slept. Fifteen hours later, she woke in full-on labor with normal vitals. She birthed perfectly, in her home with two women friends at her side.

A woman’s contractions had taken a couple of days to become regular, but she had been able to eat and sleep and her birth had gone beautifully. Now her placenta was not coming. Three hours after the birth, there wasn’t any bleeding, but there was no placenta either, so I gave her Natrum muriaticum. Her tears and her placenta came together, while she talked about something that we had known but that she did not want to discuss: she was giving birth on the birthday of her first child, who had died in an accident several years before.

A mother became feverish with mastitis several days after her birth. She tried herbs, supplements, acute homeopathic belladonna and then bryonia, which seemed to work for a short while, but each time she relapsed into a high fever and extreme breast pain. I started to feel that homeopathic and herbal treatments were not working in this case, and we might need to seek allopathic help. Then, during my third visit, her husband revealed something that they had not thought relevant before: She had been told some devastatingly sad news several days after her birth, the timing of which coincided with the initial mastitis. Prescribing based on her constitution, which included the silent grief, rather than the specific mastitis symptoms, provided the healing remedy—Natrum muriaticum.

Physically and emotionally, we carry the oceans within us, and sometimes we need help to allow ourselves to dive into the oceans of feeling that are thought to be too painful to bear. Letting go of grief with tears can be infinitely healing.

Peggy Sawyer lived in Ashland, Oregon, where she practiced homebirth midwifery care that included homeopathy from 1982 to 2003. She was the mother of five including her youngest, twin boys. She was the grandmother of two children whom she had the privilege of catching at home.

On December 4, 2003, Peggy died of an aneurysm at age 50. She is survived by her dedicated husband, Willie, who hopes to carry on her work.

In Willie’s words
(as told to Jonnie Dale)

“Peggy touched our lives deeply. Of all the people I have known Peggy was the most able to see through the veils of illusion, she lived the truth to the tiniest detail—birth, death, life, education—she was impeccable in simply living the truth, humbly touching people’s lives.

“She was the truth.

“I am filled with love and gratitude and bliss and excitement. I feel her presence. I have connected with her spirit. I connect with her in everything all around. There is a knowingness, deep within.
She fought for the healing of the planet and protection of people.
In a higher, more powerful way, she is not confined by the limit of body,
she is here for everybody, still doing the work, helping.

“It is up to us to do our part on the physical plane.
In a physical way, we’re still working together.

“In spite of all the emotions, I’m feeling pure delight.
I’ve also been initiated, I haven’t gone like Peggy,
I have gone through initiation before, and now at an even higher vibration.

“We’re all just gonna pull together and help one another, empowering each other.

“The last few months in our quiet time together she would talk about something big coming up in her life, something really big, really good, not just in her life, but world wide, evolving, another initiation to higher consciousness. I was feeling it too.

“We’re in a really amazing transition time, we have the power to do it.
People are finding the will to do it.

“I am setting up a foundation, to continue all the work, the behind the scenes, the full gamut,
midwifery, healing, child rearing, education, nutrition,
give all those things a nudge, whatever way is appropriate.

“Peggy was beginning to e-mail about a year ago, to connect with people all over the world.

“She spent the last couple of months working feverishly sowing seeds, coming into this most amazing power, she laid it all out, nurtured by others, that’s what she was working so hard to do.

“We can encourage each of us to hook up more links. It’s not hard, it’s fun—going with the flow of the cosmic evolution is very enjoyable cuz you’re actually creating consciousness, enough to feel cosmic. Consciously creating it and you are a part of it, it can be fun. If you’re not making it fun, you’re not doing it right, like the giant puppets dancing, we’re all singing the same songs, one movement, total connection.

“Open your heart up all the way to the person/s you are with, to the world in general. The future will be fun.“