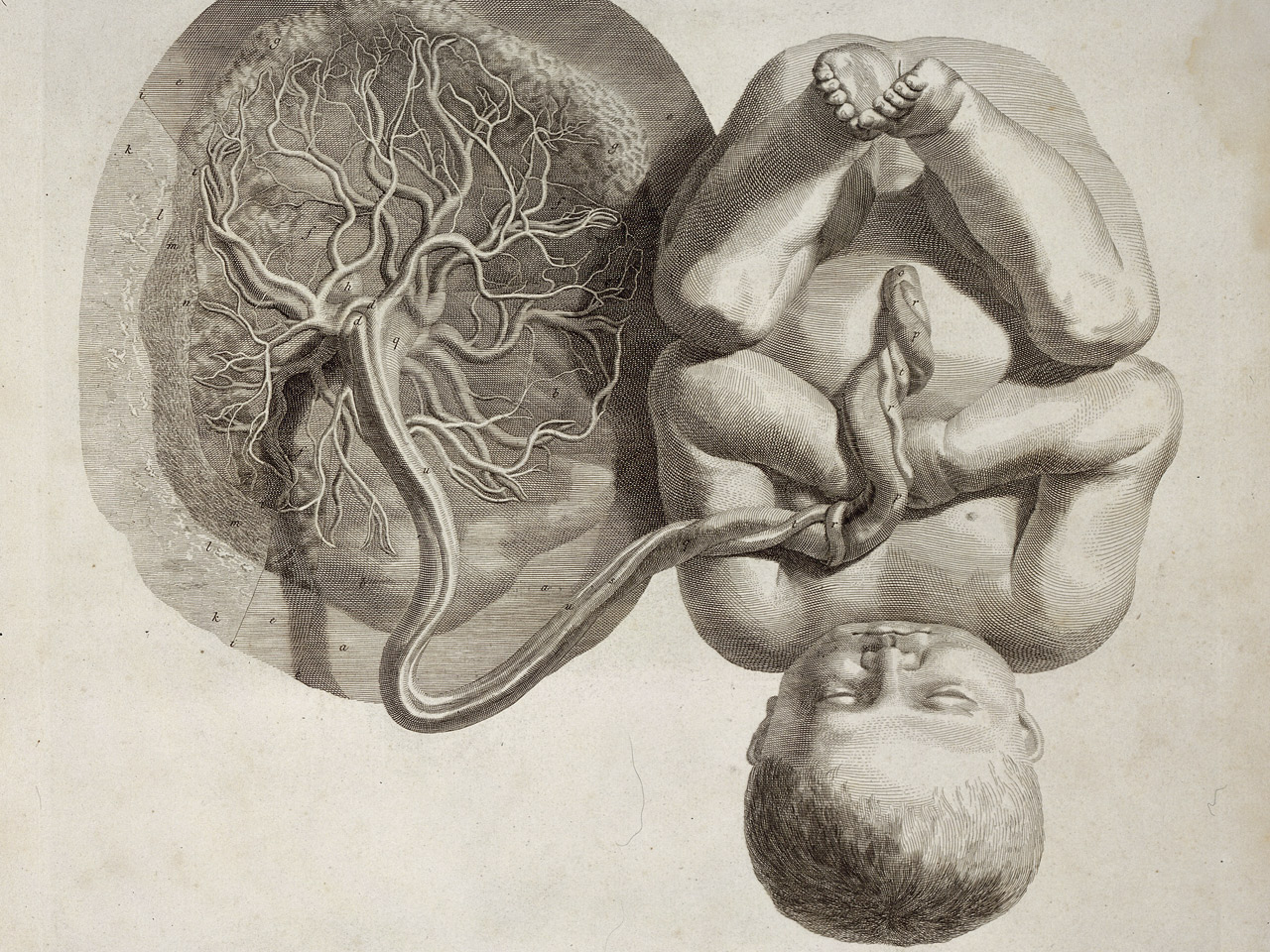 The umbilical cord is a distinctive anatomical structure by about 22 days post conception. It is recognizable as the connecting stalk between the chorion and the primitive cardiovascular system.

My favorite description of the development of the umbilical cord comes from an old text, Science and Art of Midwifery (Lusk 1884). (The copy I have was originally purchased the year of publication by F.D. Prentice, MD, and beautifully claimed by the owner with an elegant flourished signature. He also left a smattering of handwritten notes throughout the text as well as an account of the development of the Chamberlain Forceps, handwritten no doubt with a quill!) Lusk writes:

To understand the structure of the cord, it is well to bear in mind the various particulars connected with its development. At the time when the allantois first appears as a sac-like projection from the intestine, the embryo is hardly more than an appendage to the umbilical vesicle. The larger size of the latter directs the allantois over the posterior extremity of the fetus. By its growth and extension, the allantois reaches the chorion, and forms a sort of pedicle, by means of which a vascular communication is established between the embryo, and the periphery of the ovum. This pedicle is the first indication of the umbilical cord. The fully developed cord consists, therefore, of a sheath from the amnion, the gelatine of Wharton, the umbilical vein and arteries, and traces of the umbilical vesicle, and the pedicle of the allantois. (Lusk 1884, 57–58)

The allantois (a sac-like projection from the intestine) does not function in the human embryo but blood formation occurs within its walls during the third to fifth weeks of gestation and its blood vessels become the umbilical vein and arteries. The intraembryonic portion of the allantois runs from the umbilicus to the urinary bladder. As the bladder enlarges, the allantois involutes to form a tube called the urachas. After birth the urachas becomes a fibrous cord called the median umbilical ligament. If this remains patent (patent urachas), leakage from the urinary bladder through the umbilicus may persist into adulthood.

To Cut or Not to Cut

The placenta and cord are, in effect, organs of the newborn. The cord develops from the same tissue that makes up the fetal side of the placenta and this tissue is contiguous with the baby’s skin. Cord clamping is the first medical intervention experienced by most humans as part of the third stage of labor. Delay in clamping and cutting of the umbilical cord improves neonatal cardiopulmonary adaptation, increases blood pressure, improves oxygen transport and red blood cell flow, reduces the number of days on ventilation and oxygen with sick and premature infants and reduces the incidence of anemia.

Active management of the third stage of labor is the current medical establishment’s preferred mode, facilitated by the use of synthetic oxytoxic drugs and controlled cord traction, to force the birth of the placenta. Proponents of active management claim to use it to reduce maternal blood loss. They justify this routine procedure claiming that by delaying clamping, the baby will experience hypervolemia (excessive blood), overworking the newborn’s heart due to overfilling. Conversely, hypovolemia, a significant lack of blood, allows the heart to collapse in extreme cases due to a severe lack of volume. In less severe situations, the result of hypovolemia, brought on by a lack of placental transfusion, may result in anemia and polycythemia in the newborn (referring to the quality of blood).

Expectant management involves the use of intervention only when there is a clinical need to do so, refraining from the unnecessary procedures that instigate trouble. Premature clamping increases the number of infants requiring transfusions later due to hypovolemia, especially premature infants.

Before birth, the unborn child’s lungs are fluid-filled with little blood flow as the baby receives oxygen through the cord and placenta from the maternal bloodstream. After birth this exchange continues until the infant’s respirations are well established. At this point, the lungs fill with air and the blood from the right side of the heart flows through them. The cord shuts down on its own once this is accomplished. In the interim between birth and the natural occlusion of the blood flow in the cord, the infant’s brain and body are nourished with oxygen-rich blood from two sources, ensuring a healthy transition to neonatal life. If the cord is cut immediately following birth, blood within the cord and placenta, which the baby would normally use to establish lung circulation, remains trapped in the placenta. The infant will then divert blood from the other organs to fill the vessels in the lungs. This premature ligation always causes some degree of reduced blood volume and asphyxia.

The Benefits of Delayed Clamping and Cutting of the Umbilical Cord

Higher iron stores. The estimated volume of blood available to the newborn when the cord is not ligated immediately ranges from 10 to 60 ml of blood per kg of body weight, which raises the total blood supply by 20–60%, resulting in a reduction of infants affected by hypovolemia (decreased blood volume, normally resulting from blood loss and dehydration), thus also increasing the available circulatory iron stores. This also results in a lower incidence of anemia.

Reduced incidence of ischemic organ damage. This is especially true with pre-term infants.

Reduced incidence of brain damage. This refers to damage that is both minimal and clinically detectable (cerebral palsy, autism etc.) due to oxygen deprivation or asphyxia. Oxygen deprivation at birth causes minimal brain damage. The amount of available oxygen to the newborn can be increased by leaving the cord intact and allowing for placental transfusion.

Prior to birth infants rely solely on blood from the placenta. After birth the shift is a dramatic one—to survival by their own respiratory efforts. A newborn, distressed or not, will continue to receive oxygen from the available stores via the cord until the cord stops pulsing, reducing the amount of time an infant is oxygen-starved. Delayed clamping is especially beneficial in the infant struggling to adapt to breathing immediately after birth. These infants are always the ones whose cords are severed very prematurely and who are also separated from the mother for artificial resuscitation.

Think about letting the infant adapt more slowly, next to the mother, while life-giving oxygen is pumped into him/her through the cord. Resuscitation can be done very successfully right there next to the mother without the insult of premature cord clamping. It has been postulated that delayed clamping improves brain function by providing increased oxygen supplies. This may in turn decrease the rates of disorders such as cerebral palsy, mental retardation, autism and schizophrenia, disorders that have been proven to be caused or exacerbated by oxygen deprivation during gestation.

Improved renal function. This occurs through the reduction in numbers of infants affected by polycythemia, dehydration, etc.

Increased levels of maternal hormones passed to the neonate. Thyroid levels may be normalized having positive influences on the newborn’s basal metabolism.

Stem cells. The cord blood is full of T-cells, which have cancer-fighting properties. The cord blood storage industry drains this valuable product from the cord, flash freezes it and stores it to be used in case the infant develops cancer later in life and charges several thousand dollars over the lifetime of the infant for the privilege. (What?!) Leave the stem cells where they are and they may prove to prevent the cancers in the first place.

Premature clamping may lead to patent ductus as the normal rerouting of the fetal to newborn circulation is abruptly broken. Premature clamping means this rerouting is not allowed to occur gradually due to the abrupt reduction in oxygen levels immediately following birth. This is especially significant in the premature infant as only about one-half of available blood is in circulation in the infant before 30 weeks gestation (with full-term babies, the rate rises to two-thirds).

Vitamins, minerals and hormones are also abundant in placenta blood. Delayed clamping may impact vitamin K levels, providing naturally higher levels of this vitamin vital to prevention of vitamin K deficiency bleeding (VKDB). Might delayed clamping provide high enough levels to avoid injecting newborns with chemicals? Polycythemia is often quoted as an adverse consequence of delayed clamping, but is more likely attributable to the routine injection of the synthetic chemical vitamin K given without question to all newborns. The trace mineral chromium is also abundant in placental blood. Adequate quantities improve insulin sensitivity improving glucose levels, thus reducing the stress on the infant’s pancreas by requiring a decreased level of insulin production.

Premature clamping and cutting of the umbilical cord appears to be a medical procedure of convenience for the hospital staff without thought to the myriad of problems it may cause. The baby is considered a by-product and easily set aside after birth to be dealt with by the nursing staff or the on-call pediatricians who are then responsible for normalizing a stressed newborn.

The World Health Organization sums it all up this way: “Late clamping (or not clamping) is the physiological way of treating the cord, and early clamping is an intervention that needs justification…in normal birth there should be a valid reason to interfere with the natural proc­ess.” (WHO 1999, 5.5)

Patricia Edmonds received her initial training from Northwestern School of Practical Midwifery in Portland, Oregon, in 1977. She is one of the founding mothers of the Oregon Midwifery Council and has been the editor of Birthing for 15 years. Her two children were both born at home. Though Patricia attempted retirement, she now continues, with passion, to do birthwork as a midwife. Patricia has authored three publications:

View all posts by Patricia Edmonds

What Do We Do with the Specimen? A Reflection of Miscarriages in the Emergency Department