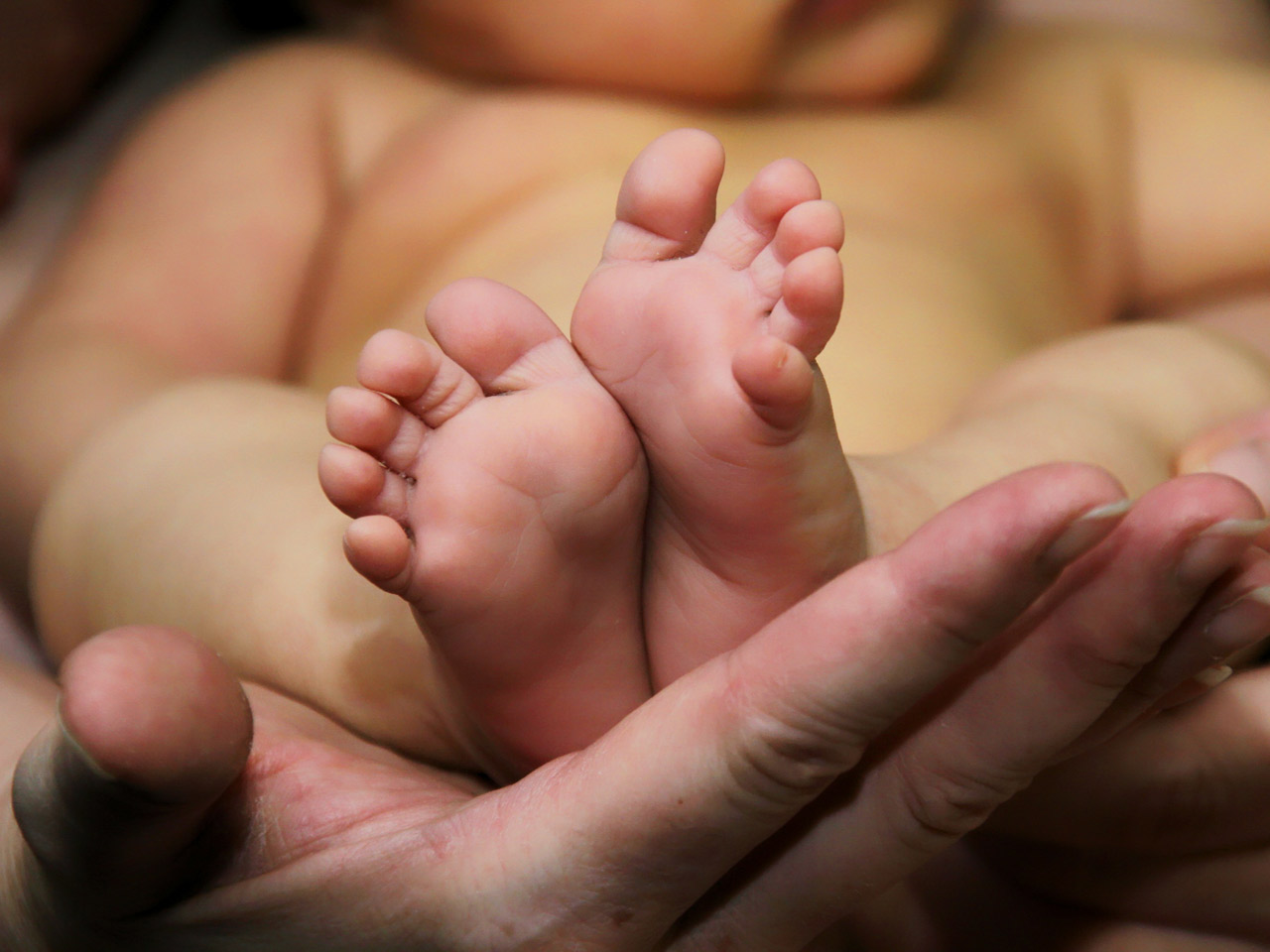 I love that midwifery is an ancient profession. Modern medicine has offered little to make birth better or safer, other than cleanliness, the availability of blood transfusions, and antibiotics, when needed. Birth has worked since the beginning of time. Birth is generally safe. However, even with modern medicine and a healthy lifestyle, there are times when death walks by, seeking to snatch the joy of families and contaminate homebirth.

I sit here pondering my client as her breath is pumped into her body by a machine. A tube is affixed to her nose for nutrition and another tube drains her bladder. I know she was snatched from the hands of death. She is surrounded by family. Her week-old baby and 3-year-old daughter are cared for by daddy and extended family. Could I have foreseen this? Could I have prevented this? What should I have known that I didn’t?

My hands are consecrated by the Lord for life, not death. When Pharaoh, the king of Egypt, asked the Hebrew mid-wives to begin the practice of sex selection and kill the baby boys as they were born, those midwives obeyed the calling of life and the god of creation. They disobeyed the king of death. In the King James version of the Bible, the midwives reply to Pharaoh: “The Hebrew women are lively and are delivered ere the midwives come unto them.”

I, too, have obeyed and heeded the sanctity of my calling. Yet death walked by to steal this precious mother. I stand over my unconscious client, praying that the maker of life will heal her back to “liveliness,” to wholeness. I trust in the maker of the Universe, who has a unique love for mortals. I am thankful for the power of modern medicine.

I think back to her 35-week visit. The swelling began in her feet. It was pretty severe. I have seen this type of swelling frequently. Her BP was fine. She developed cellulitis in her thighs a few days after her 35-week visit. Of all the crazy things. I scratched my head. This didn’t make sense. Her husband thought it was his fault because she was clipping his toenails, and bacteria must have got on her as he held her between his thighs. A trip to the ER and 10 days of powerful antibiotics, and the cellulitis was healed.

At 36 weeks I drew labs, except for GBS. I put that off for two more weeks due to the antibiotics she was taking. I watched the urine protein and BP for preeclampsia. She exhibited no swelling in the hands or face and her BP was barely elevated. The edema was 4+ below her knees; however, ACOG has stated that edema alone is not a marker for preeclampsia but a normal state in pregnancy.

Two days later I made a home visit to check the BP. Two days after that, at 37 weeks and 2 days, she had prodromal labor. I made labor checks. Her contractions waxed and waned and her cervix remained at 3 cm despite the contractions. The BP was a little elevated—140/90—but with rest it normalized to her baseline 120/80.

Twenty-four hours later, with another labor check, her BP was up to 160/90. The parents were adamant that they did not want to go to the hospital. I told them she must have the baby, and it looks like preeclampsia so hospitalization would be the safest course. The mother, father, and mother’s mother all wanted to stay home.

After a trip to the chiropractor, the contractions stopped. I had her get in Epsom salt water, and the BP came down to 120/84. I sent her to acupuncture and drew her labs before she left. At 2:15 pm, I headed out to finish clinic. At 3:30 the contractions were back. At 4:30 I texted them the results of the labs: Liver enzymes were fine; BUN was <2. Her creatinine was 0.49, and her Hgb was down from 10.2 two weeks ago to 8.8. There was no preeclampsia. To the best of my knowledge she was in fluid overload. What? At 4:59 I got a text saying that she was headed to the hospital for pain re-lief. I told her I would meet her there and excuse myself from my current client.

I arrived by 5:30. They were running two liters of fluid for her epidural. Her first BP was 160/90 but, after fentanyl, it came down to 120/80. I personally handed the results of the complete metabolic panel (CMP) to the nurses, telling them I found it odd that she had no BUN—and the lab had checked it twice. I didn’t know what that meant. I handed over all of her previous pregnancy labs. The liters of fluid were running. I was actually worried about the liters of IV fluid she was receiving. She had had 3.5 liters, by my count, before it was time to push. At the doctor’s request, I left the small room to minimize the number of people for this family’s precious moment.

The next day in the hospital everything seemed normal and mom was breastfeeding. Her husband hates the hospital so I had to convince him not to take her home AMA. She stayed two days post-delivery, mostly for the baby, and was then discharged home by her OB.

I made a home visit the night after she was released. Her husband said the whole family had a cough, so they were keeping their distance. My client had a cough that she called sinus drainage. It seemed dry—at the back of her throat. Her BP was high—really high—180/110. She was up, walking around, lively, but still swollen in the lower extremities. She complained of some mild incontinence, but her perineum was fine. Her cough was very light and she asked for “a natural cough remedy, and when will this swelling go down?” No headaches, no visual changes, no liver pain. No swelling in her hands or face.

I considered when I could return and recheck her BP since she was not interested in going to the hospital that night. I gave her strict preeclampsia warnings. I knew that I would have a battle getting them to the hospital a third time but I was truly worried. I left about 7 pm with strict instructions to them both that all was not well and she may need another hospitalization.

At 5:30 am she texted that she couldn’t sleep due to the cough, her chest hurt, and she had orange sputum. She couldn’t sleep even sitting up. I told her to go to the ER, that it was serious. It could be pneumonia or it could be fluid in the lungs from preeclampsia. She didn’t want to leave her babies, so she and her husband sat around talking about it. At 9 am she called her mother, who gave her the same advice as I had. Finally, at 11 am, she headed to an urgent care, where they immediately transferred her to the hospital.

Her ICU doctor diagnosed heart failure, peripartum cardiomyopathy (PPCM), and critical pneumonia. By 1 pm she had crashed and had been placed on respiratory support. The ventilator, her doctor told us, was to prevent a heart attack—which would kill her.

The lab results did not show preeclampsia. But the high BP, severe swelling, and 1+ urine protein could easily be considered preeclampsia. If these symptoms presented in the non-pregnant population, they would be considered signs of heart failure. I am not a physician. I don’t know everything. Fortunately, she was under an obstetrician’s care. But her obstetrician also missed the PPCM diagnosis.

After visiting my client, I went home before heading to a late clinic day. Before I could sit to rest, the ultrasonagrapher called. A client’s baby no longer had a heartbeat. I got in my car and drove 30 minutes to hold the mother and her husband. The angel of death had taken this one.

I am consecrated to life. I don’t choose to midwife death. I choose the healer’s path. My ancient grandmothers offered up their very lives to save the Hebrew boys. Shifrah and Puah were the angels of life. Pharaoh could have killed them for their disobedience. Instead Yah, the Great I Am, sent the angel of death to the Egyptians. Shifrah and Puah were blessed for their faithfulness. Four thousand years later we honor these women by remembering their stories.

Each day I added an extra visit to my schedule at dusk. I headed to the ICU to pray over my client, sit with her family, and let them talk. Her mother told me that her daughter’s heart stopped during her first birth. She said everything went silent, then she took a deep gasping breath and the machines started going again. What? I wasn’t told that during the intake history; but then, my client would not have remembered the incident. If that were true, it could have been the beginning of her heart failure. Everyone is seeking answers. The doctors say it could be three weeks or three months that she is on a ventilator. Dad is asking about when we make the decision to pull her off of life support. There are no answers. Only faith.

PPCM is very rare. Generally, fewer than 1500 women per year are diagnosed (Zolt and Elkayam 2016). Its onset is between the last month of pregnancy and the fifth month postpartum. The heart muscle enlarges and cannot adequately pump blood through the body, edema builds up, and fatigue sets in. Potential causative actors may include being over the age of 30, malnutrition, a weakened heart muscle, obesity, diabetes, smoking, alcoholism, terbutaline use during pregnancy, a history of myocarditis, or possibly an infection during pregnancy (Okeke, Ezenyeaku, and Ikeako 2013).

The doctor believes that, in this case, the infection in the mother’s thighs might have spread to her heart. She was on a strict diet for gestational diabetes, thus decreasing her natural intake of carbohydrates. In addition, her appetite had decreased in the last week so she had not been eating much. She was spilling ketones in her urine. I had planned to recommend discontinuing the GDM diet at the next visit, but she went into labor. Perhaps malnutrition played a role. We may never know. It feels random; but there were possible signs, as we all look back.

Good news arrives nine days postpartum. We are overjoyed as she is weaned off the ventilator. It is a new birth. On day 11 she is sent home. Two days later I make my standard two-week home postpartum visit. It is one day shy of baby’s two-week birthday. My client is her old self—walking around, caring for her infant and 3-year-old daughter.

Her mother is present and helping with the household. Things are getting back to normal. All of her swelling is gone. The doctor has prescribed Lisinopril, Metoprolol, and a baby aspirin daily for her heart. She is pumping and dumping for now (until the Lisinopril is discontinued). I am praising God for hearing our pleas for her life: The angel of death was not victorious.

Sandra K. Stine Tallbear is a 1993 graduate of the UCSF Midwifery program. She has supported families at home and in birth centers since 2004 and has helped to keep birth normal in the hospital since 2002. Sandra is a NARM preceptor, mother, grandmother, and wife.