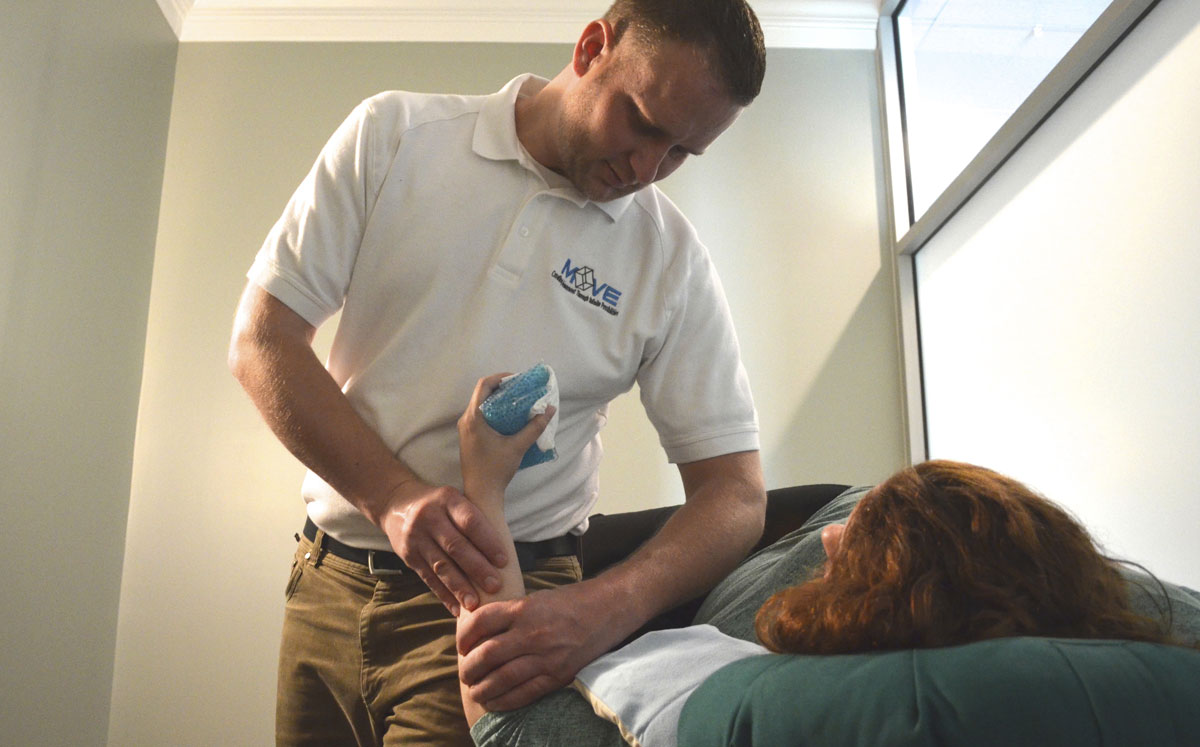 Recently, I had a client who was 15 weeks pregnant ask me to help relieve pregnancy-induced pain she was experiencing in her hands. Upon palpation of the lower arms there seemed to be a cramp or spasm in the muscles of the forearm area. The client reported that she had done some research on her own and found that carpal tunnel syndrome was a common symptom of pregnancy, but one that usually begins later in pregnancy. As an experienced bodyworker, it didn’t make sense to me that this particular woman would suddenly develop carpal tunnel syndrome simply due to pregnancy—even though this is a common belief in maternity care. I decided to do my own research on what is known about the physiological cause of pregnancy-induced carpal tunnel syndrome. What I read was a general consensus that during the second half of pregnancy these symptoms may be caused by excess fluid retention.

In my professional opinion, the symptoms presented—which frequently lead to a carpal tunnel syndrome diagnosis—are not actually carpal tunnel syndrome but a mild yet chronic incidence of compartment syndrome. Compartment syndrome is a painful condition that occurs when pressure within the muscle of a specific area of the body, such as the arm, builds to dangerous levels. This pressure can decrease blood flow, which prevents nourishment and oxygen from reaching nerve and muscle cells. Fascia (tough membranes throughout the body with a tensile strength that some have compared to that of aluminum) surrounding the arm will only allow for so much pressure to occur, eventually leading to severe pain from pressure and loss of function to the nerves controlling the hand. This is similar to carpal tunnel, but different enough that an improper approach to treatment can leave a client with compartment syndrome and continued pain of the hands and wrists.

After reading that the most common treatments for carpal tunnel during pregnancy were cortisone shots, wearing a (reportedly often ineffective) splint or minor surgery, I thought there had to be a better way to treat this common pregnancy complaint. My diagnosis and treatment hypothesis were based on the description of pain from my client and the idea that excess fluid was being retained in the body.

The treatment I chose to try on this particular client was one I had been using for years to help with lymphedema in women who had had a mastectomy. During the treatment, I have the pregnant mother lie on her back, if possible, or side lie with her arm elevated vertically in the air. I then place a heating pad in the axilla (armpit) next to the lymphatic duct. The heating pad is used to vasodilate the lymphatic duct. In the raised hand, I place a cool-to-cold ice pack, which will cause vasoconstriction at the upper part of the extremity. The pushing action of vasoconstriction from the cold and the pulling action of vasodilation from the heat into the lymph duct, with some added light massage and flushing of the arm tissue, causes the fluid to flow more quickly into the drain at the axilla. Within a one-hour session we were able to alleviate the pain in the arm, restore dexterity and function back to both hands and almost fully restore grip strength.

Upon checking with my client at 24 hours post-treatment, she reported that a dull ache remained in her left hand, but the severe levels of pain she had been waking up with had been “reduced by 90–95%.” I advised my client to perform the treatment function at home for approximately 20 minutes for each hand prior to sleep at night. This recommendation was based on the lack of movement during sleep, which slows the drain process of the lymphatic system. (This simple treatment can be taught to families by midwives, physicians and doulas to bring relief to mothers who suffer from what is commonly diagnosed as pregnancy-induced carpal tunnel syndrome and, perhaps as a side effect, will decrease unnecessary medical intervention for pain and discomfort.)

Over the course of the following month, we continued treatment and research, based on my belief that compartment syndrome was the appropriate diagnosis for this particular client. We experimented with using compression sleeves post-session to try to keep the fluid closer to the torso before it filled the arm, but we discovered that the fluid would still pass the compression sleeve and get caught in the hand, causing increased pressure there.

Through continued research I hypothesized that because lymphatic fluid is mainly pumped by the diaphragm on the inhale breath, either a higher level of stress and a more shallow breath pattern or lack of movement/exercise could be a cause. During the inhale breath, increased abdominal pressure pushes lymph into the less pressurized thorax. The pressure reverses during exhalation, with valves preventing lymph from being pushed backward. Working with positive abdominal pressure in athletes and the general population, I have found that diaphragm function is not being completed down to the pelvic floor. The common breath, which is frequently limited in the general population, would be even more limited in pregnant women whose fundus level has reached above the navel region. Without the diaphragm engaging properly and causing pressure to disengage the pelvic floor, the abdominal pressure does not complete a cycle. During pregnancy, increased respiration (deep, focused breathing) or movement may help alleviate the stagnant fluid.

Additionally, I discussed this treatment technique with clientele over the age of 50 and to determine whether the treatment may have been used in the past, but forgotten over time. None of these clients indicated that they had received or had the treatment suggested during any of their pregnancies.

About Author: Joseph A. Kleman

Joseph A. Kleman, CPMT, LMBT, is a massage therapist who has developed a fondness for pregnancy and the miracle of life. While in school at Ashmead College in Fife, Washington, he had the privilege of studying with a midwife. He has also taken body/mind centering courses in fetal and infant development and studied pediatrics for children 3 years and older.

Babies Put Their Foot Down
Sign up for our other lists.