Midwifery Today > Issue 104 > The Midwife and the Doula: A Tale of Two Sisters 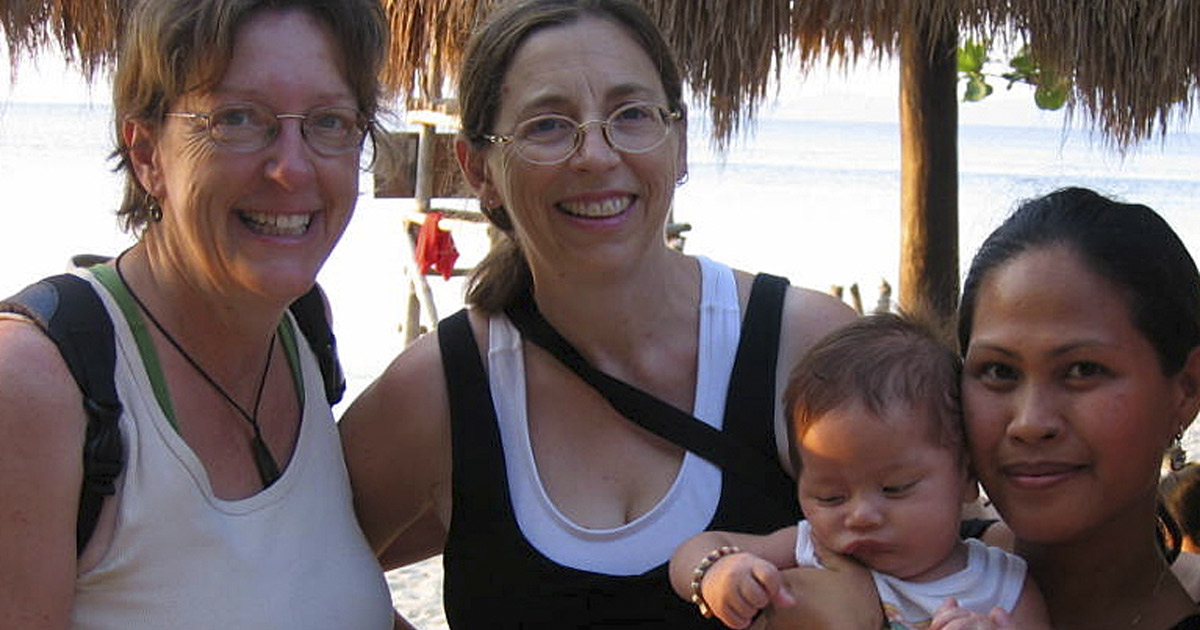 My pager goes off at 2 am; I jump out of bed and throw on my clothes, hitting the landing in less than a minute. I pound my fist twice rapidly on my sister’s door down the hall. She appears almost immediately and says, “Be right there.” I grab my bag and the keys to the truck and go out into the tropical night. As soon as I get the engine started Terri is in the passenger seat—we drive the three minutes to Mercy In Action’s birth center, where I will “midwife” the birth, along with another Filipina midwife, and Terri will “doula.” The year is 2008; the place is White Beach, Mindoro Island, Philippines.

For 12 months and more than 100 births, this midwife and doula sister-team have worked together at births. But it was not the first time we attended births together, and it was not the first time we raced to beat each other out the door when a labor call came. We had started that as young girls growing up on a remote horse ranch in northern Nevada. We had attended hundreds of births together with my dad, all our growing-up years together. We reunited now, replacing birthing equines with the human species. It all felt natural.

I have been a midwife for more than 30 years, living and working among the poor and under-served families in Alaska, Asia, Latin America and now again in Asia full-time. My sister Terri worked in law enforcement for more than 30 years and distinguished herself in the field of crime prevention. She worked in California, Alaska, Wyoming and back in California before retiring and moving to spend a year with me in the Philippines, becoming a doula in the process.

At one point in her doula process I told her she should become a midwife if she really wanted to be a help, but I know now that was not fair to her. Doulas have a different, distinct role that is important.We need all kinds of compassionate birth workers—midwives, doulas, nurses, doctors, educators, nutritionists and any other specialty that will help to protect birth on this planet.

Terri is now back in California, helping our parents with their horse and cattle ranch, serving as a doula and a doula trainer. She visits her daughter (a midwife) and granddaughters in New Zealand from time to time, trains doulas around the world and dreams of another trip to visit me in Asia.

I am living in a small house in the Philippines, daily riding my motorcycle to births in the monsoon rains, wishing for more birth professionals of all kinds to come alongside the never-ending work of helping under-served women have good, safe births.

The work is too urgent for any sense of competition between any of the birth specialties. We need all the professions to help make birth safer. I am always saddened to hear about bad blood between doulas and midwives, between doctors and midwives, between nurses and doulas…on and on into insanity, while pregnant women and newborns are suffering horrible outcomes in childbirth around the globe.

My own family shines a light on this conflict—we are a microcosm of cooperation. Even within our nuclear family, one of our sons is a doctor, another is a midwife also training in pre-med, another knows more about nutrition with his master’s degree in kinesiology and strength training than I ever learned, and my two daughter-in-laws are both CPM midwives. My niece is a midwife, and my daughter-in-law’s sister and mother are doulas and midwives.

I am a midwife. My sister is a doula—there is no sibling rivalry in this family!

Vicki Penwell, CPM, is an international humanitarian aid worker, licensed midwife and midwife educator who has practiced since 1981, first in Alaska and then in Asia since 1990. Vicki and her extended family of four generations live and run a birth center in the Philippines, where they founded a nonprofit charitable organization called Mercy In Action, which trains midwives and establishes birth centers in poor countries. The Mercy In Action birth center in Olongapo, Philippines, is run by national midwives and funded by donations so that every delivery is free of charge to the woman and her family. Outcomes of more than 13,500 births have been excellent, using the International MotherBaby Childbirth Initiative (IMBCI) model of maternity care.

View all posts by Vicki Penwell

When Vacations Are Not Enough
Sign up for our other lists.