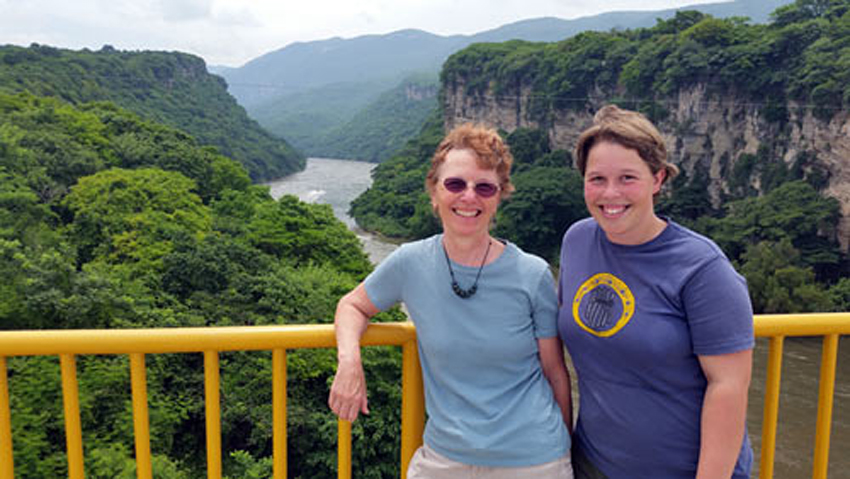 All photos provided by author except as noted

After my daughter Mandy graduated from college in May, we began planning a graduation celebration trip. Her dad was happy to stay at home and feed the cat. As coordinator of Midwifery Today’s country contacts and the one who updates our online international pages, I was eager to include visits to some of the people with whom I’d been in contact. We chose Mexico and Belize and set about packing.

Always one of the quickest to respond to our international inquiries, Gail Johnson of Belize came through quickly and positively when I put out our intention. Gail responded, “Mi casa es tu casa.” She also put me in touch with a midwife near Tulum, south of Cancun on the East Coast of Mexico, where we would spend our first three days. Additionally, Jan Tritten got me in touch with Akane Sugimoto Storey, the interim director of Luna Maya Midwifery Center in San Cristóbal de las Casas, Mexico, where we were to spend the second of our two weeks. We were set for a journey with a birth theme: As mother and daughter, we would visit two countries and meet three midwives and four of their clients.

Midwife Aneke Schmittner of Playa del Carmen, Mexico, at a recent birth, where little big sister jumped into the birthing pool with baby

Shortly after landing on Mexican soil, we met Aneke Schmittner, who came to Mexico on what she called “my first journey across the big ocean” from Germany. Here she met the father of her children and stayed. Today she is the single mother of three with an active homebirth midwifery practice.

Aneke does all of the prenatals in her client’s home. “Since that is where the birth will be happening, I want to know all about the home and family—their diet, other children and adults living there, what the room she’ll birth in is like, sanitation, and so forth.”

Aneke made a stop at a business owned by a couple who were clients of hers. Marilyn and Mike took turns holding little Peggy, who giggled at absolutely everything. The parents told me how important Aneke was to them and how Peggy’s birth was not the first pregnancy she had helped them with. The first ended with an unexpected stillbirth. They cited Aneke’s thorough commitment to see them through their loss as contributing greatly to their ability to accept and move on. They were delighted to have her as their midwife when they were pregnant again. However, they ended up needing to have the baby in a hospital, and the doctor wouldn’t allow the midwife to be in the room during the birth.

A sign on Aneke’s car reads: Partera 24/7 (Midwife 24/7). “It’s not working. People here don’t understand what ‘24/7’ means. Also, they don’t get why you would want that, instead of just going to the hospital. Word of mouth is really the only promotion.”

Facing such attitudes in the local institutions, Aneke and another midwife in the area are trying to start a midwifery center in Playa del Carmen. Aneke says “I’m not very involved politically or with networking. The other midwife does much more of that. I focus on one birth and then another.” Aneke’s passion reminded me of Jan Tritten’s signature line: Changing the world, one birth at a time.

Next, we set off in a first class ADO bus for Chetumal, near the Mexico-Belize border. I thought about what it would be like to live in Mexico and be pregnant. On every ride we took on one of these buses, violent American-made movies were being shown on prominent monitors throughout the bus, the sound blasting from overhead speakers. I rarely saw anyone actually watching the movie. When I was pregnant, I was highly sensitive to even news of violence, let alone violent movies with alarming sound effects. I put on my iPod with ear buds and did my best to tune it out; I hoped not many pregnant Mexican women needed to ride these buses.

We were on our way to meet midwife Gail Johnson, Midwifery Today’s Country Contact for Belize, who planned to pick us up at the border…unless one of her three clients who were due in the next few weeks went into labor. Well, Mother #1 had given birth a few days earlier to a 7 lb 14 oz girl in Corozal Town. Mother #2 went into labor soon after, so Gail had flown to San Pedro on Ambergris Caye, the largest island in Belize, to be with her. Baby #2 arrived just a few hours ahead of our arrival. Naturally, Gail’s husband, Earl, picked up the tasks left behind (as the best midwife husbands do), which included picking us up at the bus station. He also transported us to and from the boat launch for a cruise to visit Lamanai, the stunning ancient Mayan ruins near Orange Walk.

Midwife without Borders Gail Johnson of Belize, sharing a photo with Hillary and 6-year-old Lilly

All three of these clients of Gail’s had gone well out of their way to find a supportive midwife who would help them have the kind of natural homebirth they wanted. Couple #3, Christina and husband Keith, had come down from New York and rented a house nearby their chosen midwife. In case Christina went into labor on the early side, Christina and Keith had even flown over to the island to be near Gail while she assisted Family #2. As San Pedro is quite a happening beach town, Earl, my daughter and I all hopped on one of the tiny passenger planes to join them for a holiday weekend. The bay was unimaginably turquoise as we flew over, with small reefs protruding here and there. In addition to an amazing time snorkeling in Hol Chan Marine Preserve with nurse sharks and sting rays, drinking smoothies on the beach by day and One Barrel rum on the hotel balcony by night made for a delightful weekend.

Coast of Caye Caulker, across the water from San Pedro, Belize

The six of us took a passenger ferry to Caye Caulker, a sweet island south of Ambergris Caye. Christina, very fit and looking no more than seven months pregnant, took the bouncing boat ride in stride. Gail worked the crowd with her outgoing personality, “borrowing” infants to coo at with midwife confidence. There, we got to visit with a mom and daughter whose birth Gail had attended six years earlier. I observed a serenity in this mother that I realized she shared with each of the other clients we had met on our journey. We ate sea grapes in their front yard and admired enormous hibiscus flowers.

Back at Gail and Earl’s lovely home, surrounded by palm trees, lantana, and both ascending and descending heliconia, we heard about the next string of births Gail is committed to, this time in Nicaragua. Word of mouth has spread about Gail’s willingness to travel, so now she has three births lined up for early fall in Nicaragua. I simply can’t do justice to the stories of these three births in Belize; I can only hope Gail will write about them herself. My favorite birth story of all came from Earl. A crummy hospital birth had convinced Gail’s daughter to try a homebirth with her mother the next pregnancy. While Gail was off at another birth 20 miles away, the daughter went into labor. Expected to help, Earl says he simply went into the room “and I told her ‘Stop that. No, no, no, no, no, no. Your mom is not here! Stop that.’” After exceeding the speed limit more than a little bit, Gail arrived in time to ensure her daughter’s dream of a better birth.

Though it was difficult to leave Belize, it was time to make our way to San Cristóbal de las Casas, a 7000-foot elevation town in the southwestern state of Chiapas, Mexico. We were welcomed by a lightning storm and hummingbirds and our friends from Eugene whom we were visiting that week. Little did we know that this town would be rocked in a few days by a 7.1 earthquake 140 miles away in Guatemala.

Luna Maya Midwifery Center is located on a quiet, narrow street, near a chapel that rises up on a nearby hill. The center’s purple logo of women’s graceful bodies told us we had arrived. We met with Akane Sugimoto Storey, the center’s interim director, and Janell, a public health grad student on a summer internship from UC Berkeley. Founded by Cristina Alonso to ensure that women in Chiapas have access to safe humanized birth and health care services, the center offers a wide range of services, including prenatal classes, cranial-sacral work, psychological counseling and doula training. The Luna Maya midwives primarily attend births at a woman’s home. Luna Maya’s herbal workshop is run by the apprentices and staffed by volunteers, including a former student from C.A.S.A. in San Miguel de Allende who is now assisting births at Luna Maya and a former client with whom the Luna Maya midwives accompanied in a VBA2C.

While walking to the center, I had noticed graffiti urging women to take control of their own lives. Si el hombre piensa que le PERTENECES, entonces REBELARSE es un DERECHO. “If a man thinks he owns you, then rebelling is a right.” As there are several references on the Luna Maya website about assisting women who suffer from domestic violence, I asked Akane to tell me how they approach this issue. She said their approach is to listen for any readiness by a woman to talk about her situation, but they don’t push. Akane said there have been some positive outcomes with fathers being present even when the midwives were worried about how things would go. She said she has seen courageous transformations in some fathers when they see their partner exhibit such incredible strength during birth.

Walking back home after our tour, it was difficult to see so many young children hawking goods on the streets, tugging at our sleeves to buy small woven goods. Every society has some changes to make; improving the lives of indigenous children seems to be one of Mexico’s urgent ones.

As we rode in a taxi to the airport to begin our journey home, we asked Don Guadalupe, the driver, to pull over at a viewpoint of Sumidero Canyon. Our smiles in the photo of us there disguise our worry as we watched him step onto the highway between trucks to get the best shot. I really wanted to ask Don Guadalupe whether his three children had been born at home, whether he had been born at home. I was eager for one more story of birth. Alas, my Spanish was not good enough for such a conversation, though we did have quite a laugh together over the fact that Mandy and I both slept right through the earthquake the night before!

Boarding the plane, I felt quite satisfied with our trip. Certainly, the generosity of the wonderful people we arranged to visit enabled us to have a very rich experience.

Wanda J. Walker has worked for Midwifery Today since 2003. Along with her editing, website work and international interests, she plays the mbira and teaches Zimbabwean marimba in her home and at Kutsinhira Cultural Arts Center in Eugene, Oregon.