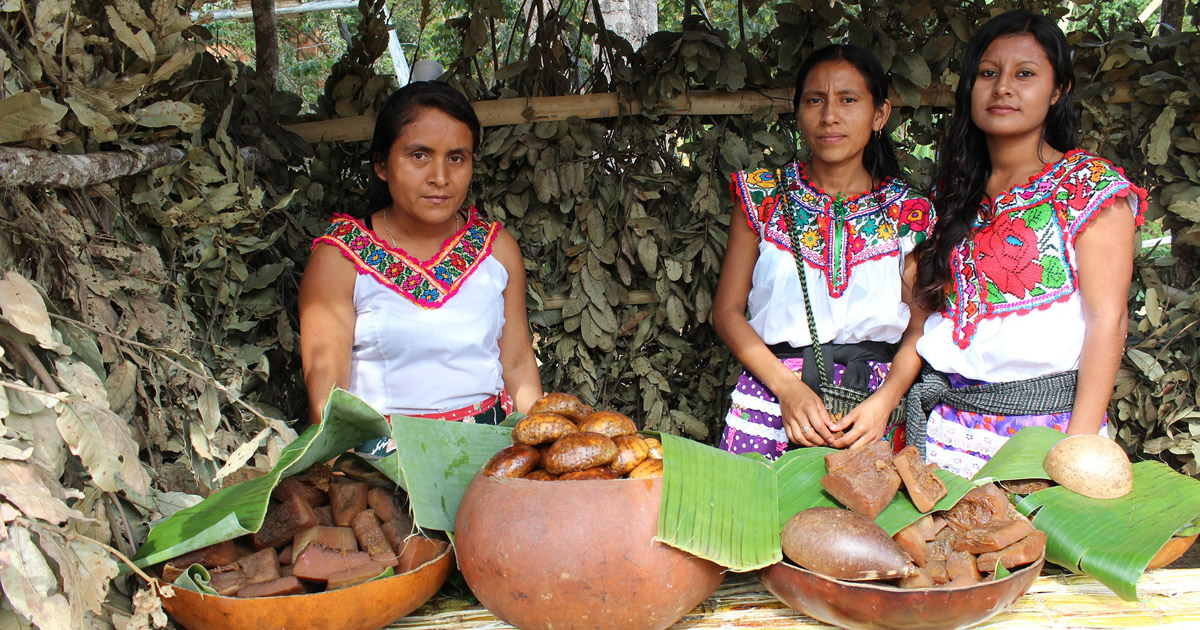 We began the Oaxaca, Mexico, conference with an exercise in global healing. Marina Alzugaray and Yeshi Sherover Neumann created the idea of splitting our group of about 275 people into “conquered” and “conquerors.” Marina, who is originally from Cuba, stayed with the midwives from the conquered group: Mexico, Guatemala, Brazil, Costa Rica, Jamaica and one Maori midwife from New Zealand. The group’s goal was to identify themselves with dignity and to welcome the others as invited guests. Yeshi’s group, the conquerors, consisted of those of us from the United States, Canada, Europe and Australia. Yeshi took us outside and asked what positive gifts we would like to bring our hostesses in the other group. We were to bring gifts of sharing and love—not guilt. We decided on four people to bring something. We came back into the room as invited and welcomed guests, rather than as conquerors. We came in greeted by each one of our sister parteras (midwives) in a long line of welcoming, forgiving, smiling and loving. We greeted each other, creating a beautiful bonding for the whole conference. The traditional midwives were so welcoming and fun-loving. We felt blessed to be with them. After the greetings, we brought our offerings. Our four representatives stood North, South, East and West, around the table bedecked with marigolds (representing the sun) and candles in a bowl; herbs and flowers were lovingly left on the table. Each representative was asked to explain her gift and each was translated, as was the entire conference. Ela, who is from Germany but has been working in Oaxaca for the past 20 years, brought a plea for forgiveness as she bent to her knees. The emotional tone seemed to beg for forgiveness for all sorts of imperialism and world politics, past, present and future. I could only think sadly of the imperialism my country still engages in and the medical imperialism being perpetuated on the whole world.

As I learned many of the amazing ways that the traditional midwives have of healing everything from placenta previa to hemorrhage, and I recognized again that their midwifery culture goes back thousands of years, I became all the more sad about the medical imperialism happening today. I feel so sad and ashamed that the International Confederation of Midwives (ICM) and the World Health Organization (WHO) still call them by the derogatory term “Traditional Birth Attendant” (TBA). I grieve for all of the traditional wisdom that has been annihilated and is still being annihilated. But this event was a positive sharing event and negative thoughts were just fleeting. We celebrated our survival together in a circle of love, friendship and unity that forged a different future for all of us.

During the conference, Doña Queta Contreras and Doña Hermila Gonzalez burned incense laid out with the candles, water, flower and herbs. Prayers were said and respect permeated the conference. We passed out bunches of herbs and flowers, trading them with each other. Doña Queta refreshed the display several times to refresh the conference energy.

Araceli Gil Archundia, an aspiring midwife, was one of our main helpers and contacts in Oaxaca. She works with Centro de Estudios de la Mujer y la Familia (CEMyF), a woman’s center, and had organized the Dias de la Luna conference to bring together Oaxacan midwives to talk about their past, present and future. She figured it was so hard for parteras and parteros to come in from the countryside that it would be good to do the two events side by side. At the end of the Dias de la Luna gathering, I spoke and Araceli told us about what the event had accomplished. She shared a statement of 13 points that the Oaxacan midwives had created. [Ed. note: Please read the statement in Pronunciamiento/Pronouncement.] Later we used that document as a petition to reclaim midwifery in Costa Rica, where it was recently outlawed. We also made and had everyone sign one for the Oaxacan midwives. They felt it would strengthen their position as well to have international signers. In our international meeting, we decided that many different countries could use this petition to strengthen traditional midwifery. In the U.S. we could use it as we try to save authentic midwifery.

Photo by Joni Nichols
Participants at the conference

Because we stayed at the church (the conference venue) with the traditional midwives, we took our meals and cold showers together. We had a wonderful opportunity for networking and making friends. We learned so much. We learned about herbs, language, culture and spirit from the indigenous midwives from all over Mexico and Guatemala. We also had a rich exchange from Brazil, Denmark, Norway, Spain, Switzerland, England, Australia, France, New Zealand, U.S., Canada, Puerto Rico and Jamaica. We talked about barriers to practice, but mostly we talked about practice: what you do for shoulder dystocia, breech and fear, placenta recipes and more.

I want to share with you a few things that we learned. Alison Bastien told us she does not like to use the term “alternative medicine.” Instead, she calls it “original medicine.” In Brazil, they use a lot of music in birth. “For her birth, have the woman record her favorite music. It is a good way to get her up and moving,” a Brazilian midwife suggested. Someone else had this one-liner to help women get past their fears: “Your mother had you, your grandmother had her, your great-grandmother had your grandmother.” Antonina Sanchez said they have a saying about fear in Guatemala: “Fear of seeing pain in birth is worse than the pain of birth, so help the husbands.” From a traditional midwife, “Our science is our experience.” From Joni Nichols: “It’s better to prevent problems than to cry over them. Get her up moving and dancing; tell her to shake her booty.” For a breech tucked under the ribs, have the woman lie down with her head and shoulders 18“ lower than the rest of her body. Work the baby’s head from under the ribs and then do an external version.

Yeshi led us in a communication exercise, then a potlatch where we each exchanged a gift we had brought. This was a beautiful exchange and a deep moment. I received a stunning pin from the Denmark Midwives Association and the plan for a conference in Denmark in 2005 as my gift.

After much studying and sharing, we had a fiesta. There were songs and dances from Guatemala, Jamaica, Brazil and the U.S. There was a Native American song, an Irish song and Oaxacan songs. We also experienced a play that moved us all greatly. It began with two native women holding and rocking their babies. Along came a European dressed as “Education” in a cap and gown. She took their babies away and the mothers did a convulsive, almost death-like dance that they finished by landing in a dead pile on the floor. Along came Berta Juarez from Guatemala, representing traditional midwifery. She nursed and cared for them until life returned to them. She gave them back their babies. They were healed and rejuvenated. They went to Education and made peace with her; and they all celebrated this new friendship by lighting candles and bringing flowers. All of this was done without a word spoken. I don’t believe there was a dry eye in the house.

This was a very healing conference. As part of the closing, the Oaxacan midwives made each person a little decorated bag and pinned it on them. The Guatemalan midwives said they put some of our spirit in their bags and took a part of us home with them. Though the conference is over, I have a feeling of really just beginning. We honored the traditional midwives, but as well they honored us. Near the end of the conference I had the thought when interacting with these loving women, “Where and how could we ever get to know traditional midwives like this?” What an opportunity and blessing!

I am also pleased that we seeded many new projects. We had a meeting with the women at CEMyF after the conference. They told us of their plan to start a school for traditional midwifery taught by traditional midwives. They desperately need money for this project. Marina has seeded an exchange program to take students to Oaxaca to work with traditional midwives, tour the area and practice speaking Spanish. She will give part of each fee to CEMyF to help fund their school. We are also looking for people who want to sponsor the school or know how to get grants. Several of the young midwives from the conference are still in Oaxaca, working on more exchanges. They promised us some articles. I cannot think of anything, besides following instinctive birth, which speaks to peace more than these small outreaches do.