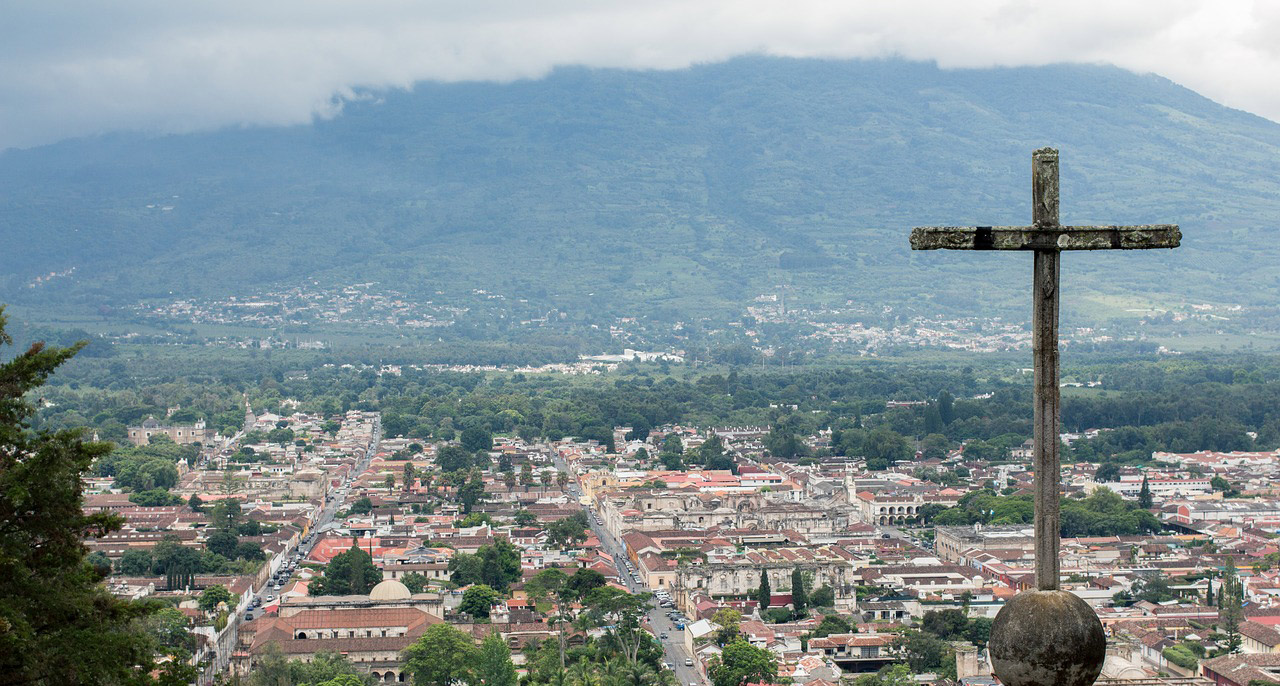 In August 1999 I spent eight days in Guatemala, where I visited the town of Concepción Chiquirichapa, in the western highlands outside of Quetzaltenango. I stayed at the home of Felipe and Elena Ixcot, who with their five children had fled repression and death threats in Guatemala in the early 1980s. Elena and Felipe had been educational leaders in the community before their 16 years of exile in Weston, Vermont, where Benedictine monks had invited them to come and live as part of the sanctuary movement. In March 1999 Felipe and Elena made their first trip home to their town after 17 years. In August Elena asked me to return with her and meet with the comadronas (midwives) from her community. Now that it was safe for them to return, they desired to help their people and build bridges of understanding and trust between the people of Guatemala and the United States. Such bridges grow through personal contact.

On a Saturday morning in the enclosed courtyard outside the space they rent for a clinic, I met for over two hours with ten comadronas of all ages who gathered to meet Elena’s “midwife friend” from North America. Several comadronas came with their children, who sat silently during the whole meeting, occasionally making eye contact and then grinning from ear to ear. The oldest midwife was 79. Only a few spoke Spanish, the rest Mam. Elena translated from Mam into English and from English back into Mam. My felt memory was that we were all speaking the same language. We communicated as much through our eyes and the nodding of heads in mutual recognition as we did with words.

The main spokesperson for the group, Antonina, a beautiful and soulful woman, began the presentation. She told me how the midwives in this area had organized themselves three years ago after the signing of the Peace Accords that ended 36 years of war in Guatemala. They formed the “Association of Comadronas of the Mam Area,” a name proudly displayed on the wall outside the clinic. They serve six widely scattered towns and villages with over 90% of the births taking place at home. The midwives travel mostly by foot. They told me how they had organized to become more educated, to share information with each other, to gain political strength and to train young midwives to carry on the Mayan birth traditions and knowledge of the use of herbs. They opened a small clinic and birth center for women who cannot birth at home and invited two Spanish physicians—a pediatrician and an obstetrician—to help at the clinic.

The midwives are the primary health care workers in their area. They are responsible for maternity care, for birth, for “health promotion” and for carrying on their cultural traditions. In Mam, the sign on the clinic reads, “Center for the Health of Women.” These midwives are the most trusted members of the community.

Illiteracy in the area is 75–80% and infant mortality is high, due to economic and environmental conditions and the social breakdown that accompanied the war and repression of the past 40 years. Uninterrupted childbearing has resulted in serious health problems and made many women old before their time. As happened in the United States, there is a move to eliminate community-based midwifery by professionalizing it and moving birth into hospitals. The World Health Organization refers to these women as traditional birth attendants (TBAs) although they have been the midwives in their communities for generations. While I was in Guatemala I learned that the Mayan people had a very ancient and sophisticated health care system, which can be pictured as a triangle with the Mayan priests at the top, but with midwives forming the base and holding up the whole system. Centuries of marginalization and repression have undermined this system. While people are still traumatized by the genocide carried on during the 36-year war and suffer from the poor economic conditions since the war, the peace accords signed in 1996 offer some hope for improvement in their lives and the opportunity to reclaim their tradition. During my visit, hope was in the air. I saw it in these women’s eyes and heard it in their voices.

I felt honored that these midwives trusted me enough to come out on a hot Saturday morning to share their story with me and to learn of my midwifery journey. Near the close of our meeting, a very old midwife asked how many years I had studied in school to be a midwife and what I thought of their being simple, uneducated women. Of the 10 only two were literate, as I found out when I tried to pass a paper around to get their names! I told them I had not gone to school for midwifery but had apprenticed, learning from other midwives and from women and birth, as they had. Feeling glad to be an apprentice-trained midwife, I said I knew that they hold much wisdom and have valuable experiences to share with me. I told them of the suppression of midwifery and the persecution of midwives in United States history, and I saw them nodding in recognition as this was translated. I heard later they said it was because of my sensitivity towards them, and my humility and respect, that they knew I had been sent to work with them and to help. They said they would no longer be invisible to the world. There would be people who knew of their struggle and work, who valued it and who cared. I felt humbled on hearing this and challenged to do what I can to help.

They spoke of materials needed for the clinic and their dream to get land and build their own birth center and clinic with adequate meeting and classroom space, a place that would be theirs and could not be taken from them. They want enough land to grow herbs so they can teach their preparation and use. The “scorched earth” policies carried out by the government against the Mayan people during the war destroyed many of the medicinal plants they used, and contributed to a breakdown in the oral transmission of knowledge of these herbs. (On my second visit in January I was told that 48 new medicinal plants were discovered and used in these mountains into which whole villages of people were forced to flee during the war. These herbs were unknown before the war but are now part of the folk knowledge and are being added to the compendium of herbs used by the Mayan people.) Antonina estimated needing $20,000 for land and a building, a huge amount in a desperately poor country.

Initially the midwives’ voices were soft and their words were spoken with hesitation. But as the sharing continued speech became more rapid, with several midwives interjecting comments at once. All of a sudden it seemed there was more laughter than words—raucous, deep-belly, tears-producing laughter. Elena said that this is what Mayan women do when they get together; they laugh and laugh and tell each other stories. Even during the hardest times this was true. And they dance to the music of the marimba, just as they taught me when I returned in January to bring my first supplies.

Between August and January when I returned for a three-week stay to study Spanish and visit the midwives, I collected nearly $800 worth of materials: Pinard horns, towels, scissors, clamps, stethoscopes, blood pressure cuffs, hanging baby scales, umbilical tape, rubbing alcohol, hydrogen peroxide, bulb syringes and tubes of topical antibiotics. I also gave them the Spanish editions of Susan Klein’s Book for Midwives and Hesperian’s Where There is No Doctor for Women. These donations were received for the clinic with gratitude, much ceremony and many tears, after which I was served a wonderful meal prepared by the midwives. Before we sat down to eat, several midwives addressed the fact that most births take place at home, not at the clinic. Several midwives had traveled several hours to get to the clinic and spoke of their need for supplies for the births at home. Out of this conversation grew the idea of pairing midwives in the States with midwives from this community. I was given the names of 15 midwives and a list of items they needed.

On returning to Vermont in January, I went about telling their story and finding 15 midwives to pair with them. Some midwives lovingly prepared kits and sent them to me; others contributed money for me to prepare kits. The cost including carrying cases came to about $150 for each kit. My apprentice made beautiful aprons with large pockets. In March, friends traveling to Guatemala delivered the kits with the names of the sending midwives. I was sent photos of each midwife as she received her kit as well as thank-you notes that were written in Mam and translated into Spanish.

Three signatures and 12 thumbprints were at the bottom of the thank-you letter. In the notes it was evident that the names and messages from the sending midwives meant as much as the material aid. Included with the thank-yous were the names of seven more midwives in need of kits.

The Mayan midwives want to reclaim and preserve their traditional culture and maintain autonomy over their lives, which is why they dream of their own center. Together with Felipe and Elena Ixcot we have raised almost $14,000 toward the midwifery education/birth center, which will be a resource for the whole Mam speaking area. The Ministry of Health has set a goal of 50 percent of births being in the hospital by the year 2020. The midwives do not see this as a way of improving the health of women and infants. Indigenous women are often abused in the hospitals, and the cesarean section rates are 35 to 50 percent in the urban hospitals. The midwives want to improve their skills, acquire more resources for the local community and have the hospital be a place where respectful care is available, but only for the women who need it. They hope their center will be a focal point of exchange with midwives from the United States.

Sometimes I feel there is little that can be done here to preserve non-medicalized community-based midwifery. In Guatemala, preserving cultural ways of birthing and of nurturing and raising children encourages the sense of competence essential to the survival of a people. On the other hand, supporting the comadronas of Guatemala may be one of the most important ways I can preserve midwifery here in the United States—they remind me who I am.

Judy Luce, CPM, has been a homebirth midwife for 24 years and has lived in Vermont since 1982. If anyone would like to partner with one of the Guatemalan midwives, make a financial contribution or support this project in any way, contact her at MidwifeOne@aol.com or call 802-476-7056 for more information.

Checks made out to International Mayan League and earmarked for the project are tax-deductible and can be sent to Judy at 30 Park St., Barre, VT 05641. Also available are brilliantly colored posters (18" by 24") reproduced from a batik created by artist Jane Pincus honoring women and birth. All proceeds go to the Guatemalan Midwifery Project. Posters cost $23 including postage and mailing tube; they show the image of a woman birthing her child into the hands of a midwife accompanied by the quote from Judy Grahn: “The act of opening yourself up so that another being can pass down the channel and out of you takes a woman all the way down to the very deep of living.” Suitable for framing.

View all posts by Judy Luce

Preventing Postpartum Hemorrhage by Respecting the Natural Process of Third Stage
Sign up for our other lists.