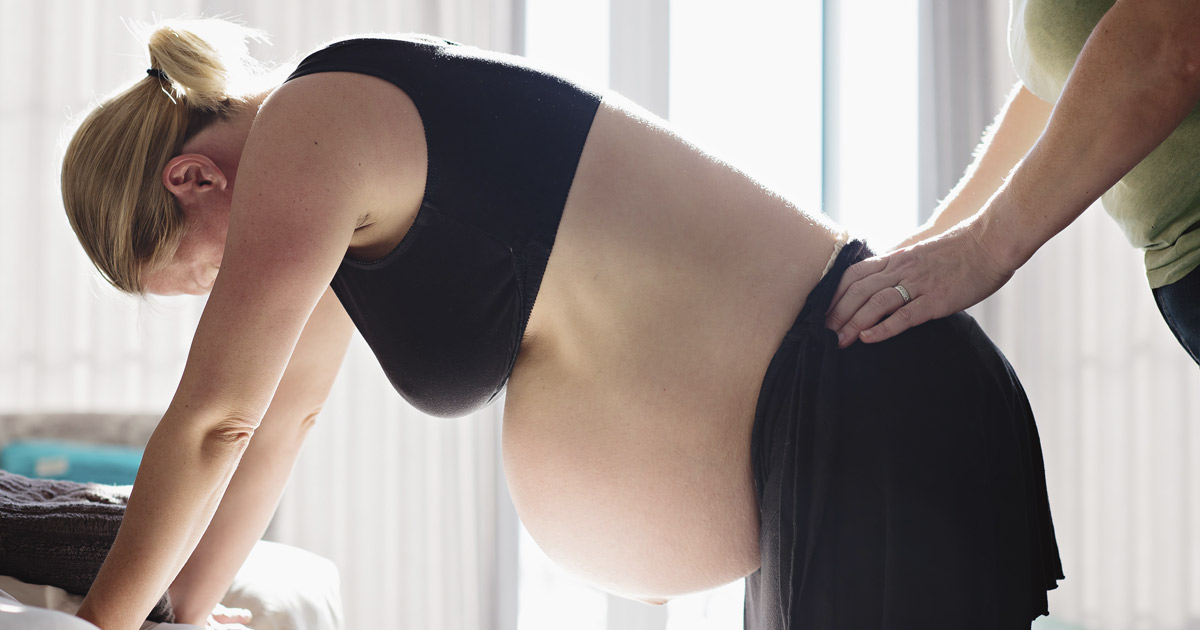 Occiput Posterior (OP) presentations are somewhat common and can be quite annoying to both the mother and the practitioner. OP means that the back of the baby’s head, instead of the more common (and more comfortable) front of the head, is in the back of the mother’s pelvis when she is in labor. During labor this means that: 1) more of the surface of the head will impact the mother’s back, meaning more back pain; 2) the baby will either have to rotate 180 degrees to be able to fit through the last part of the pelvis, resulting in a longer, harder labor; or 3) the baby may not be able to get through the pelvis in what is considered a “reasonable” amount of time; thus, the mother will end up with a cesarean. In any case, an OP presentation almost always means a more difficult labor.

There are several predisposing factors to an OP presentation. The most common one that I have noticed is the use of recliners or a recliner-type sitting position for sitting/relaxing. OP is also more common in cold climates. Any of us who has been pregnant in the winter knows how the belly becomes more and more exposed as the clothes cover less of our growing body. It is the nature of almost any animal to keep warm. I imagine that the baby finds that lying against our warmer back is comfier than our cooler, exposed belly as a reason for this. The way to help the baby to rotate forward is discussed below, but it is also important to wear more covering over the belly to encourage comforting warmth out front, too. A shorter top-to-bottom distance in the pelvis also can make a rotation toward the front more difficult, as can a prominent sacral promontory inside the pelvis. In labor with an OP presentation, the back pain almost never goes away and gets worse with contractions. OP labors are very different from OA labors! I know from experience, as the first two babies I gave birth to were OP. But I didn’t know then what I know now. (How many of us have looked back and said that to ourselves?)

I had my babies at home in the early 1970s. My first labor took 29 hours, which was considerably longer than my other labors. I know now that there were quite a few factors that contributed to this:

When a contraction was over, I remember telling someone to tell me to “relax my butt.” I knew (I could feel) what I needed to do, but I could not tell myself to do it because of the intensity of the contractions. If someone else could/would say it to me, I could do it, but I could not do it for myself. After all of those years of attending births—since the age of 12—I had no clue what it was like to actually experience having a baby. That was the reason I wanted to invite so many friends, so that it might help them when it came time for their births. There were no videos or useful films in the 1970s to help us to learn what to expect and how to help ourselves.

With my second baby, I was far more aware of some risk factors, but not all. So when the back pain returned, it was familiar and annoying, but also expected. His head was smaller, so labor was not as hard. By the time the third one came, after a few miscarriages in between, we had moved to western North Carolina. By then I had been to more OP labors and had learned a few things about how position changes in the mom can effect position change in the baby. Also, I was much better at picking up on clues of feeling belly shapes to “read” baby positions.

How do we keep babies in a more favorable position? It is easier before labor and before the baby engages in the pelvis in OP. I don’t worry too much until after 36 weeks. Babies usually make themselves a nice little nest in the right position by then. If they keep being OP, it is common for the mom to complain about back pain more than usual. I tell her several things about that:

It is a great sign that her pelvis is opening to make room for the baby, demonstrating with a plastic pelvis how the hip bones move around to make the birth easier. If OP, the baby will have the back of its head to either the right or left of the sacral promontory making either the right or the left side more painful. Often there is a little more swelling on that side than the other due to compression on the vessels. This edema can also happen to a lesser degree with OA position. Babies at term seem to be more in a ROA position, I think due to more space inside the mama on the right. The left side of her body has that big full lower bowel there filling up the space! Try to help her to avoid serious constipation, especially at the end of pregnancy, and she will be very grateful (alfalfa tablets and/or magnesium maleate are well appreciated … although that’s another article).

Sometimes, the mom presents in labor with an OP baby. The best way to help her is with position changes. However, about 15 years ago, I learned how to do what is called sterile water papules on the low back. What a wonderful trick this is! The funny thing is that it took more than a year to get permission from the hospital to do them. I could administer morphine, no problem, but sterile water? No! So I became much more aggressive about the clean floor scrubbing to prevent OP until I got the okay to help moms out with this little trick. The sterile water injections work like a charm—no back pain, more relaxation and more rotation to OA.

I also need to mention here that the huge increase in the demand for epidurals has increased the OP labors. If you want a second opinion on this, just ask any OB nurse who has been in the profession a while. The epidural relaxes the internal pelvic tissues, and due to the need to keep the relief from drifting toward one side or another, the mother is restricted to sitting up in a recliner-type position. This means the baby is encouraged to roll into OP as it is heavier toward its back!

Some OP babies just come out that way easily. This is rare, though; and usually a multipara, or a very roomy pelvis and/or small baby is the reason. For the most part, OP labors are harder, longer and more painful than OA labors. So when the mom is having a particularly hard time, think: Is this OP? Feel: Is this OP? Sometimes bony molding can hide the shape of the fontanels so that you get fooled. But the sooner you discover the OP, the better. Are the heart tones loudest at the flank? Does the mom keep grabbing at her back or complaining about it? Help her, and think: What can I do to make this better? Isn’t that why you are there in the first place?

View all posts by Lisa Goldstein

Newborns: Their Biological and Theological Uniqueness
Sign up for our other lists.