Midwifery Today > Issue 123 > Doulas and Midwives: Transforming the Landscape, Together 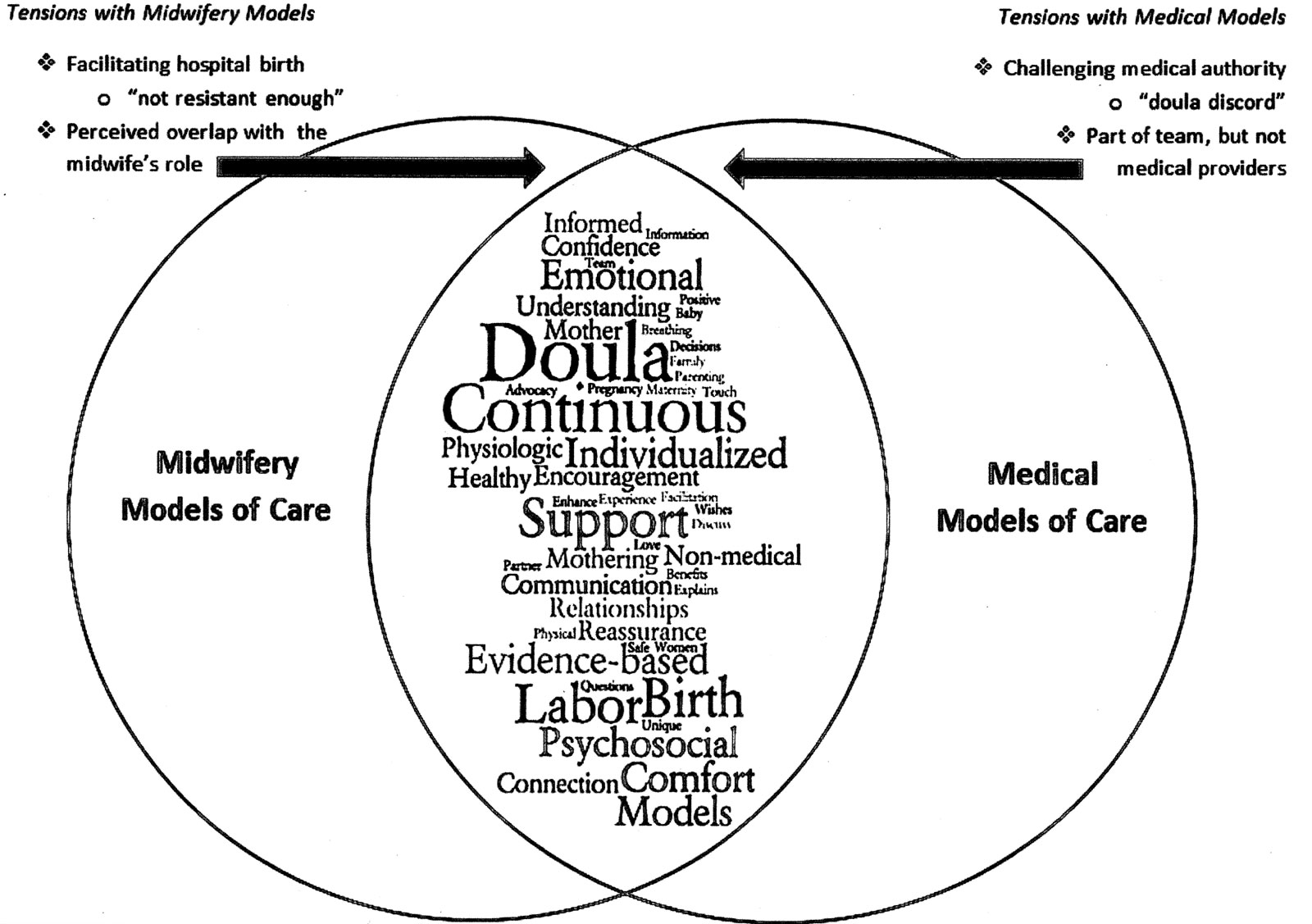 Despite spending $111 billion annually on maternity care, the United States is plagued by poor maternal and infant health outcomes, ranking thirty-third on the 2015 Mother’s Index—a global measure that evaluates the well-being of mothers and children by nation (Save the Children 2015). High rates of unnecessary interventions in childbirth combine with access to care issues and obstetric violence (Perez D’Gregorio 2010) to produce birth experiences all too often marked by disempowerment, disrespect and even victimization (Althabe and Belizán 2006; Martin et al. 2017; Machizawa and Hayashi 2012). Midwifery and doula models of care have been proposed as potential solutions to our nation’s maternity care crisis through their emphasis on normal, physiologic birth and women’s autonomy in decision-making, including how, where and with whom they give birth. Yet, despite sharing many of the same tenets and core beliefs about childbirth, doulas and midwives have not always organized in solidarity.

In a chapter we contributed to Doulas and Intimate Labour: Boundaries, Bodies, and Birth, entitled “Between Two Worlds: Doula Care, Liminality, and the Power of Mandorla Spaces,” we—as medical anthropologists and a practicing birth doula (Everson) and homebirth midwife (Cheyney)—argue that disconnects between midwives and doulas are tied to the differential spaces the two professions occupy relative to the obstetric hierarchy (Everson and Cheyney 2015). While homebirth midwifery remains highly controversial, doulas are both part of the obstetric community—through their work largely in hospitals—but not fully embraced by the medical field. In that chapter, we examine how doulas occupy a liminal, or intermediate, space within the US maternity care landscape—a space between the two worlds of midwifery/home and medical/hospital. The intermediate space is called the mandorla (or almond-shaped center) and it is created by overlapping midwifery/home and obstetric/hospital parent spheres.

Despite the tensions present in the mandorla, this intermediate space that doulas hold also has the power to fuel re-negotiation and resistance in US childbirth reform or—in the words of Johnson and Davis-Floyd—“inside the overlap [the mandorla], separate domains are united and merged into innovative structures, within which effective solutions can emerge” (Davis-Floyd and Johnson 2006, 472).

This new, dedicated section on doulas in Midwifery Today aims to explore exactly that—effective solutions to transform the maternity care landscape and advance choice, access and health equity. Effective—and, we argue, transformative—solutions to the US perinatal health crisis will not be found in care models that work in isolation. Birth does not occur in a vacuum, but against a backdrop of social, political and cultural pressures as well as needs. As such, targeted social support is integral to birth. In the chapter “Between Two Worlds,” we outline five themes that constitute doula models of care and position doulas as support specialists: 1) specialization in the psychosocial needs of childbearing women; 2) support of physiologic birth; 3) provision of individualized, evidence-based support; 4) facilitation of communication and relationship; and 5) continuous companionship. Such support can and does occur across any site of delivery (home, birth center, hospital), with any clinical provider type (midwife, obstetrician) and during any birth choice. In providing a complementary support role across place of delivery and models of care, the mandorla space that doulas occupy integrates elements of each parent sphere.

Similar to the physical and psychosocial threshold that laboring women cross as they transition from their pregnant identities to their mothering identities during birth, the work of the doula can create an opening in the otherwise medically dominated maternity landscape. Through this opening, both childbearing families and the maternity system at large can explore new messages, norms and care options. Rather than face the disempowering messages and behaviors all too common in medical care, could families learn from doulas about the empowerment, confidence and autonomy possible in birth? Could these new messages help birthing women better understand their options in childbirth? Could the benefits of physiologic birth in reducing interventions and achieving healthy outcomes for moms and babies be further achieved? Could this critical opening help to advance midwife-led care and community birth for more families? We argue a resounding yes on all counts.

In a landscape plagued by health inequities and disrespect in childbirth, we contend that resistance to dehumanizing care and the negotiation of childbirth reform must occur across models of care and sites of delivery. Rather than focusing on issues such as home versus hospital or midwife versus physician—in which doulas and families hover between two worlds, unsure of where their contribution and acceptance lies—we argue that both doulas and midwives can work together to relocate choice and power back to women.

We envision an agenda for the doula section of Midwifery Today that uses the power of the mandorla space to help midwives and doulas work together to transform the landscape and bring about systems-wide change. Specifically, we urge contributing authors to explore: 1) How can doulas help create social change at institutional and individual levels?; 2) What role do doulas play in perinatal health equity and the provision of culturally specific birthing care?; 3) How can more families access the documented benefits of doula care?; and 4) What strategies are available to doulas and midwives for working together in client-centered care models? Collectively, these questions and more will help midwives, doulas and childbearing families reap the benefits of collaborative care and find common ground to initiate needed reform in childbirth. As the saying goes, a rising tide lifts all boats.

Courtney L. Everson, PhD, is academic faculty and dean of graduate studies at the Midwives College of Utah (MCU) in Salt Lake City, Utah. As a medical anthropologist, Dr. Everson’s research addresses doula and midwifery care as client-centered care models for reducing health inequities and improving perinatal well-being. Dr. Everson is also a practicing birth doula, postpartum doula and perinatal health educator, primarily serving at-risk youth and families for the past 10 years. Dr. Everson is a founding member of the Oregon Doula Association (ODA) and the inaugural vice president of the ODA; director of research education for the Midwives Alliance of North America (MANA) Division of Research; the first vice president for the Association of Midwifery Educators (AME) and serves on the boards of directors for the Midwifery Education Accreditation Council (MEAC) and the Academic Collaborative for Integrative Health (ACIH).

View all posts by Courtney L. Everson and Melissa Cheyney

Melissa Cheyney, PhD, CPM, LDM, is an associate professor of medical anthropology and reproductive biology at Oregon State University (OSU) in Corvallis, Oregon. Dr. Cheyney is also a certified professional midwife, licensed in Oregon, Chair of the Midwives Alliance of North America (MANA) division of research and director of the OSU Reproductive Health Laboratory. Dr. Cheyney’s research centers on the US homebirth movement, and she is the author of the ethnography, Born at Home: The Biological, Cultural, and Political Dimensions of Maternity Care in the United States.

The Amniotomy Question: Examining the Pros and Cons of Rupturing Membranes
Sign up for our other lists.