Midwifery Today > Issue 113, Trauma > After the Disaster: What Comes Next in the Philippines? 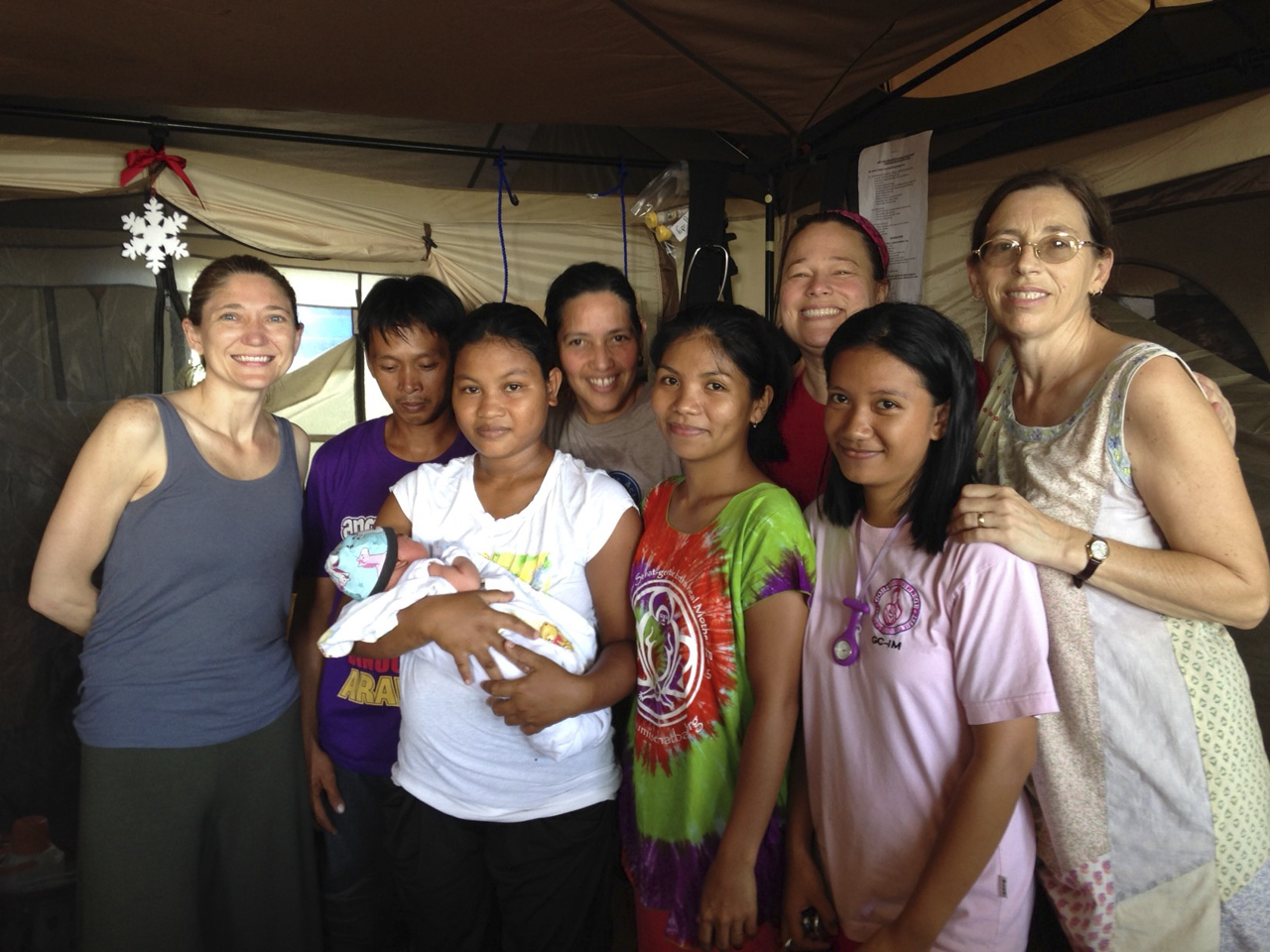 Vicki (far right) with a couple and their new baby ready to discharge from the birthing tent to go back to their own temporary homeless shelter. Volunteers: Tara Greeley, Michelle Pixianho, Jen Bunquin, Christy Martin, April Flores, and Vicki Penwell

Last Christmas season, three of us Penwell midwives were living at ground zero of the Philippine disaster zone. From before Thanksgiving until the end of January, we were sleeping on the floor (when we did sleep), delivering babies round-the-clock in a temporary birth tent and caring for hundreds of wounded, sick and traumatized survivors of the November 8, 2013, super typhoon Haiyan, locally known as “Yolanda.” We were joined by loyal Mercy In Action Filipino staff from northern Philippines, as well as a few devoted international friends who are midwives and nurses. Eventually, my son, who is a doctor trained in emergency medicine, joined us as well.

Grief makes it hard to recover from physical wounds; grief affects the immune system. Grief plays havoc with all the body’s systems. Shock and grief were the norms for the survivors, including the heavily pregnant ones.

Some pregnant women lost family members. The worst stories were from mothers who told of having their children literally ripped from their grasp by the storm and washed away forever.

Grief makes it hard to recover from physical wounds; grief affects the immune system. Grief plays havoc with all the body’s systems. Shock and grief were the norms for the survivors, including the heavily pregnant ones.

There was not enough food, water or shelter for the stunned survivors for days after typhoon Haiyan. Lawlessness broke out in areas. Imagine that your pregnant clients have to go without any clean water; they fast for days and then eat only sporadically, as there is never enough food. And on top of that, they were all suddenly homeless, sleeping on the ground, in makeshift covers and eventually in tents provided by relief organizations. Security was non-existent; fear was constant.

The conditions were horrific, and all the more so for the pregnant women, who in different circumstances would have been nurtured, fed the best foods, kept hydrated, advised to avoid emotional duress and advised to rest and relax.

Now imagine if your birth center, with all your pregnant clients in this condition, suddenly began to be visited at all hours of the day and night with kids and adults suffering medical emergencies, so that you had to handle those as well as labors.

This is a little snapshot of what it was like in the immediate aftermath. For almost a month, we provided medical care with other midwives and nurses before any doctors showed up to volunteer.

In those first post-disaster months, when it felt true that we were living in what the press was reporting as an apocalyptic situation, it was hard to see past the immediate flood of humanity in need of urgent and immediate care. But eventually, and necessarily, we moved into the rebuilding and renovation process. From April until now, we have tried to follow the recommendations and guidelines of the World Health Organization, the Red Cross and other international groups who have called for aid workers and volunteers to begin rebuilding the local clinics, hospitals and birthing centers that were destroyed in the storm, helping local medical personnel get back on their own feet rather than inadvertently building long-term dependency.

Thanks to incredibly generous donations (many from midwives, doulas and other health care people in the US, Europe, Australia and New Zealand) and a couple of grants (Global Giving and Center for Disaster Philanthropy) Mercy In Action was able to rebuild an entire clinic and birth center in the middle of one of the hardest hit communities in the disaster zone. The grand opening was in September, and in three short months, 37 babies had been born there.

We also worked on capacity building training for area midwives, which was in the form of five months of seminars using the International MotherBaby Childbirth Initiative as our guide. When the classes ended last December 2014, Mercy In Action gave each midwife who graduated a brand new birth bag, complete with Dopplers, blood pressure equipment, newborn resuscitation equipment, anti-shock garments, and hemoglobometers to replace what they had lost in the storm.

Midwives are the first line of defense against maternal and newborn deaths in this country with very high rates of both. We need to see all of the midwives affected by last year’s disaster equipped with the tools they need, and we need to see their places of work rebuilt in order to help them help the most vulnerable population: the pregnant women and children.

How can you help? Donations can still be made towards disaster recovery work on this website.

Through all of us working together, we can see the Philippines recover, rebuild and re-equip their own midwives to serve the childbearing families. The scars are there, but they are slowly healing. I see smiles again on the faces of my friends from Leyte Island. The Filipino spirit is strong and resilient. They don’t need pity—just a compassionate helping hand. We are still here beside them, offering that hand.

Vicki Penwell, LM, CPM, MSM, MA, has provided clinical maternity care for decades in low-resource, high-mortality countries and regularly teaches on midwifery best practice, dividing her time between living in the USA and the Philippines. She is the founder and Executive Director of Mercy In Action, a global NGO sponsoring birth centers in the Philippines, and Mercy In Action College of Midwifery, a MEAC-accredited school in the USA that promotes a global perspective on the provision of maternity care. Through the college, Mercy In Action offers many accredited CEU courses for practicing midwives, as well as offering a post-graduate diploma in midwifery & maternal/child health. Vicki has earned a master’s degree in midwifery and another master’s degree in intercultural studies. She is married to Scott, her husband of 42 years, and together they have raised three “Third Culture Kids” and now have two daughters-in-law and five second-generation TCK grandkids. Among their descendants are three CPMs, one MD, and one in medical school now; they all work for or volunteer with Mercy In Action in some capacity!

My Birthing Experience: Inti Imani Albarracin-Miranda
Sign up for our other lists.