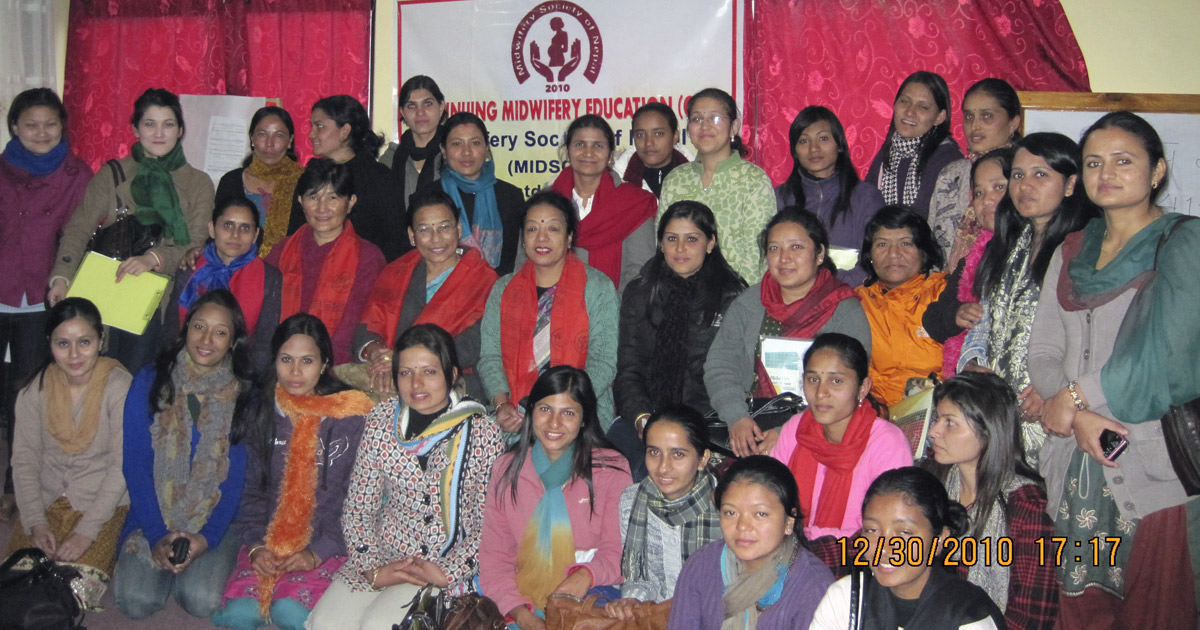 Like many resource-poor countries, Nepal has one of the highest rates of maternal and neonatal deaths in the world. According to the 2006 Nepal Demographic Health Survey, 281 women per 100,000 live births die of complications during childbirth, and 33 newborns die per 1000 live births; two-thirds of neonatal deaths occur in the first week of life (MoHP Nepal et al. 2007). This means that a newborn baby dies every twenty minutes, and every four hours a woman dies of childbirth-related causes. Most of these deaths occur in rural areas.

Maternity Care and Birth in Nepal

High maternal and neonatal death rates are the indicators of an inadequate health care system, with poor quality of care and limited access to services. Around 40% of neonatal deaths are due to preventable causes like infection and birth asphyxia. Similarly, around 69% of maternal deaths are due to avoidable causes such as haemorrhage, eclampsia, abortion, obstructed labour, puerperal sepsis and anaemia (Suvedi et al. 2009). Many of those deaths are the direct consequence of underutilized maternal health services and could be easily prevented by a health worker with the right skills, the right equipment and the right support. Evidence has shown that up to 90% of maternal deaths can be prevented when midwives and others with midwifery skills, i.e., skilled birth attendants (SBAs) are authorized and supported by the health care system to practice their full set of competencies (World Bank 2003; WHO 2005; UNFPA 2006).

In Nepal, the uptake of maternal health services is very poor. More than 80% of deliveries occur at home in the absence of SBAs. Relatives assist the majority of childbirths, and women often birth on their own. Only 29% of Nepalese women make the recommended four antenatal visits, and only 18% of women give birth in a health facility (MoHP 2007).

The Nepalese government is striving to achieve the fourth and fifth of the United Nations’ Millennium Development Goals—reducing child mortality and reducing maternal mortality. The government hopes to lower the mortality rates to 15 neonatal deaths per 1000 and 134 maternal deaths per 100,000 by 2015 (GoN 2009). In order to attain these goals by 2015, 60% of births will need to be attended by SBAs, 40% will need to occur at a health facility, and around 3000 additional SBAs will be needed by 2012 (GoN2006a).

This is an enormous challenge to the nation since, at present, maternity care is provided primarily by health workers who are not competent in midwifery skills. In Nepal, the only midwifery care providers in the community setting are maternal and child health workers with three months of pre-service midwifery training, after just eight years of schooling, and auxiliary nurse-midwives (ANM) with 18 months of pre-service training after ten years of schooling.

Auxiliary nurse-midwives, who are trained to assist women in normal deliveries and to identify complications during pregnancy, are deployed to places where proper health care facilities, nurses and doctors are not available. They assist women in prolonged labours, handle complications such as an incomplete spontaneous abortion and retained placenta, and administer life-saving drugs during emergencies, though most are not competent or confident enough to provide childbirth care to women during a normal labour. However, since they are working in rural communities nationwide, they are contributing to saving women’s and newborns’ lives.

Sadly, midwifery is not an independent profession in Nepal, nor does there exist a separate cadre of midwives. Consequently, there is no recognition of professional midwives, though nurses involved in providing maternity care are usually called nurse-midwives. Evidence across the globe shows that without having professionally competent, skilled midwives who provide a scientifically sound, hygienic and humanistic manner of maternity care based on a social model, it is challenging to save the lives of mothers and newborns (WHO 2005).

To accelerate the timeline for achieving the UN’s goals, the 15-year National Safe Motherhood and Newborn Health Plan was developed in 2006, followed in the same year by the development of the National Policy on Skilled Birth Attendants, and the National Skilled Birth Attendant Training Strategy (GoN2006a; GoN2006b). During these years, Nepal moved away from training traditional midwives and focused on training SBAs, in an effort to reduce maternal and newborn deaths. With rigorous effort from the government and from international development partners, the latest figures from Nepal’s Department of Health Services shows that the proportion of births attended by SBAs has increased to 29%; yet, there is still a long way to go in achieving the national goal of 60% of births delivered by SBAs by 2015.

Skilled birth attendants are persons with midwifery skills—doctors, nurses and ANMs, with additional training to manage uncomplicated pregnancies and to identify, manage and refer complications in women and newborns. Doctors with advanced SBA skills can also perform caesarean sections (GoN2006b). The major focus to date has been on the short-term strategy of developing SBAs by providing in-service training for already qualified doctors, nurses and ANMs to enhance their midwifery skills. National policy recognizes the need to focus on medium-term strategies that will strengthen the pre-service training of ANMs, nurses and specialist doctors to include skilled birth attendants.

Some progress has been achieved in this direction. Skilled birth attendants’ competencies have been incorporated in the pre-service curriculums of nurses and general practitioners by academic institutions and universities. So far, 2268 existing doctors, nurses and ANMs have been trained as SBAs. National policy also defines a long-term strategy that will develop a cadre of professional midwives to sustain SBAs and to act as a crucial human resource for safe motherhood, providing service and leadership in midwifery for the country. As envisioned in the long-term measures, this would include a direct-entry professional midwifery programme. However, this measure has not been taking seriously by policymakers, program managers and planners at the Ministry of Health and Population.

Establishment of a Professional Organization

Training is not the only issue; regulation, accreditation and supportive supervision of SBAs are equally important to ensure that these cadres have appropriate protection, remuneration, incentives and motivation. To advocate for these measure and to strengthen the skills of existing ANMs and nurses involved in providing maternity care, in both the private and public sectors, 11 senior nurses from nine different organisations came together to establish the Midwifery Society of Nepal (MIDSON).

It was rather challenging; there was strong resistance and opposition from nursing leaders, charging that the society would break nurses into two groups. Those nurses against our initiative were thoughtfully approached and invited to be a part of the society, and their advice was sought in drafting the constitution. Out of 11 members in MIDSON, three are former presidents and vice-presidents of the Nepal Nursing Association. Other members are senior nurses working in clinical and academic sectors.

To back up our initiative with evidence, we conducted a small survey in the hospitals of major cities to understand the views of nurses working in maternity units. Almost all the nurses working in maternity units and teaching midwifery subjects in the colleges acknowledged the need for unified voices, as well as for a forum to share and discuss efforts to improve maternal health in Nepal.

Following nine months of constant and tireless effort, in February 2011, MIDSON was successfully established and officially registered with the government authority, with the aim of contributing to the improvement of quality maternal and child health care, including reproductive health, and ensuring women’s health by strengthening and standardizing midwifery services in Nepal.

Since its establishment, MIDSON has been actively involved in conducting continuing midwifery education (CME) programs for ANMs and midwifery teachers, advocating at the national level for the rights of ANMs, working to implement the long-term measure of the national SBA policy, and arranging elective placement for international student midwives. At present, MIDSON has 50 members, and is a member of the Safe Motherhood and Neonatal subcommittee under the Ministry of Health and Population, Family Health Division. It has gained membership in the South Asia Midwives Alliance and is in the process of obtaining membership in the International Confederation of Midwives. The Midwives Alliance of North America has also supported MIDSON in designing a Web site. Student midwives from the University of Surrey donated money, and the Canada birthing model was donated by the University of British Columbia. In a short period, MIDSON has made significant progress towards achieving its goals.

In April of this year, the national SBA review meeting was held and discussions were centered on the development of a Bachelor’s Degree in Midwifery. Graduates of such a degree would replace nurses in labor rooms at institutions where midwifery education and SBA training are ongoing. It was agreed that a study to explore the feasibility of developing a professional midwife cadre would be carried out. This is a remarkable achievement for MIDSON. In addition, MIDSON has organized a national-level workshop on strengthening midwifery education and practice, and successfully observed the International Day of the Midwife in 2010 and 2011.

Laxmi Tamang is a nurse with a public health background who has worked in a number of settings since 1995. She is a founding member of the first and only free-standing birthing centre in Nepal led by nurse-midwives and a founding member of MIDSON. She is passionate about improving sexual and reproductive health services and strengthening midwifery education and service in Nepal. As an Australian Leadership Award scholar, Laxmi is currently doing her doctoral study at the University of Sydney, researching how gender-based power relations affect the uptake of sexual and reproductive health services among young Nepalese people. Learn more about MIDSON at www.midson.org.np. View all posts by Laxmi Tamang

Grandchild: When the New Grandmother Is an Expert on Babies and Birth
Sign up for our other lists.
Sponsored